Muslim immigration detainees in Brisbane have filed a complaint to the Australian Human Rights Commission claiming they have not been given certified halal food for more than 12 months; infringing upon their human rights.

Recent protests near Kangaroo Point hotel in Brisbane have placed a spotlight on the makeshift detention centre. The facility hosts around 100 refugees and asylum seekers who were evacuated from Nauru and Papua New Guinea (PNG) for medical reasons. These men, mostly of Muslim faith, have alleged that the establishment has not provided them with halal food and failed to meet their human rights.

“After research and investigation we find out the food has been provided by Serco is not halal food and this is from the beginning when we arrive in Brisbane,” said Iranian detainee Amin Afrid.

After detainees challenged Serco, the company responsible for operating the premise to show them halal certification, it was discovered that the caterers were not halal certified.

Allegedly breaching its contract with Australian Department of Home Affairs, Serco subsequently confirmed to the detainees, that the caterers were “not halal-certified” but “purchase meat from halal-certified suppliers”.

The contract obtained under Freedom of Information laws – states that it “must prepare food for detainees of Islamic faith which meets the requirements of halal meals by sourcing produce certified as halal by a recognised halal food certification organisation”. Ali Kadri a spokesman for the state’s peak Muslim body and main halal certifier, the Islamic Council of Queensland explained that halal certification ensures that all meat products and process comply with appropriate religious standards.

“[The] source companies are not halal-certified… so it’s irrelevant where these companies are sourcing their food from, because their processes, their procedures, the other ingredients they use do not have assurances,” explained Ali Kadri.

Adding to their woes, he explained that detainees already face tense conditions in detention. Many of the men have significant physical and mental health conditions and were transferred to Australia because they could not get relevant treatment in Nauru or PNG.

“We are doing enough injustice to them by locking them up without a crime for such a long period of time and if we can’t even provide them (basic food), (to) meet their dietary requirements, it’s a really horrible form of mental torture,” said Ali Kadri.

Though in Islam, unknowing consumption of certain foods is not regarded as sinful, nevertheless, such allegations may contravene a violation of human rights. 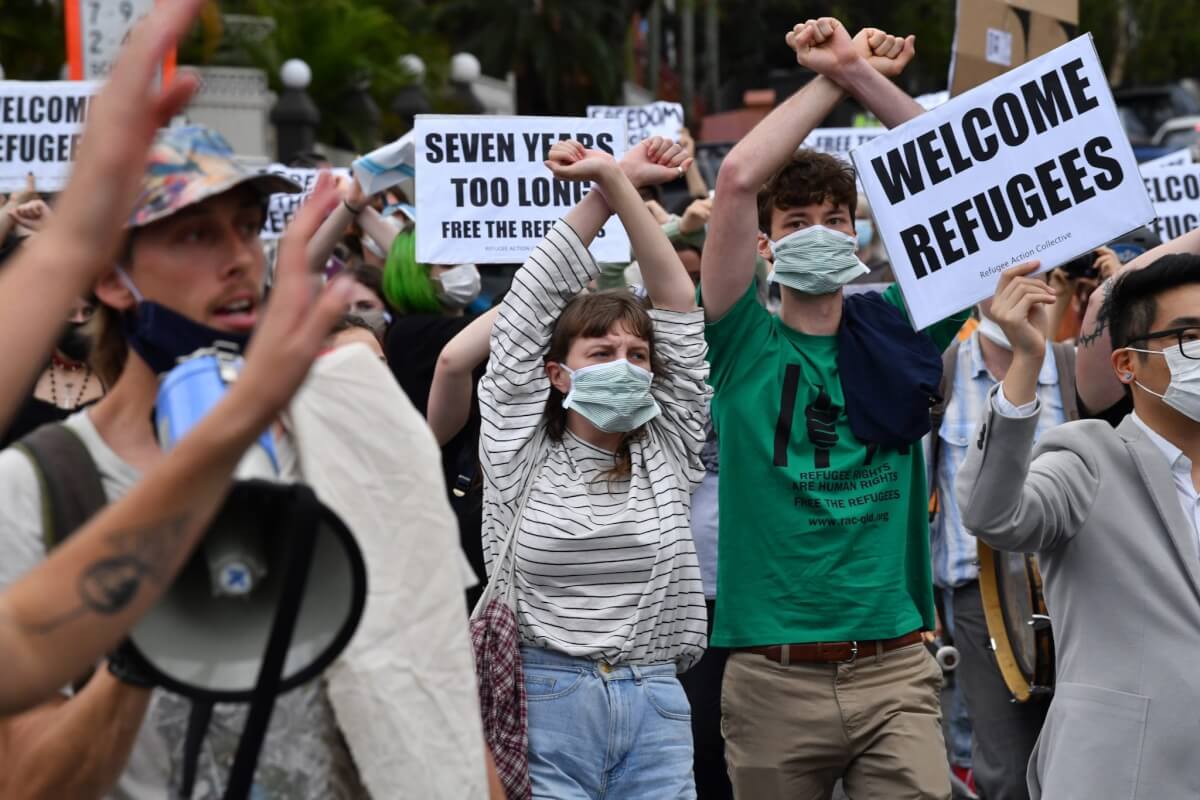 Police and protesters are seen during a rally in support of asylum seekers detained at the Kangaroo Point Central Hotel in Brisbane. Source: AAP

Some detainees have now modified their diets and have reported that their health is deteriorating due to these revelations.

“[I am] having just rice and yoghurt and losing a lot of weight and I’m 55 kg. I feel tired, weak, dizzy, and I get headaches. I have no choice,” said Afrid, a detainee.

Lawyers from the Asylum Seeker Resource Centre (ASRC) have aided detainees by redressing their grievance with the Australian Human Rights Commission.

“They feel this is a huge violation and a huge betrayal of their rights, they feel this needs redress. The substance of the complaint is that it has breached their rights…” said ASRC caseworker Nina Field.

It is hoped that the detainee remonstrance will receive a speedy resolution through conciliation with the Australian Human Rights Commission.