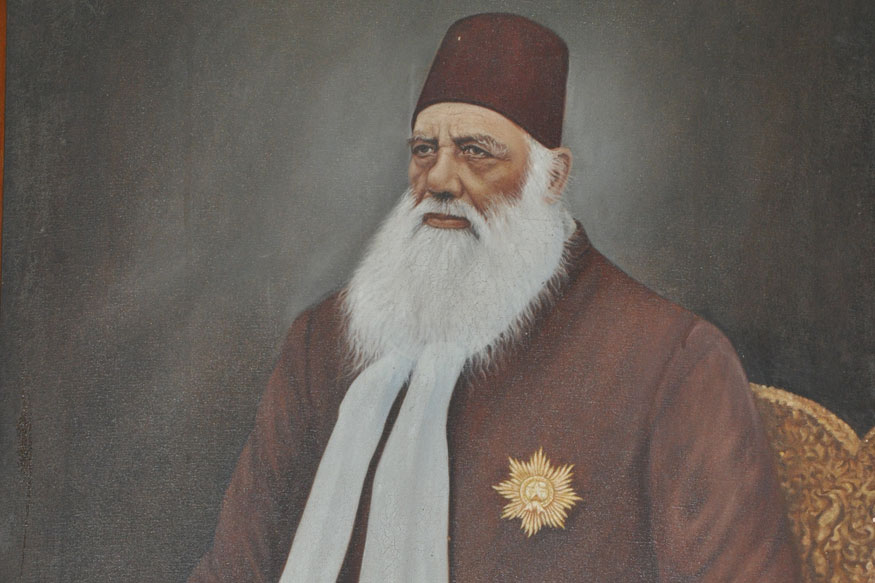 The thoughts and actions of Sayyid Ahmad Khan (Sir Syed), who pioneered the educational movement in India during the second half of the nineteenth century, indicate that he was a highly enlightened person advocating modernisation.

He propagated the idea of integration of knowledge and an educational system in accordance with the demands and requirements of the contemporary period, against the ongoing outdated traditional style prevalent during his time in India.

During the nineteenth century, under British colonial rule, India was undergoing the process of  “westernisation” where mimicking Western cultural practices were becoming the norm. This for Indians, eating, dressing, talking and behaving like their British Masters was considered enlightened and “modern.”

Sir Syed, on one hand, discouraged sticking necessarily with traditional practices that were out of date while on the other hand, he did not necessarily advocate following Western cultural practices blindly.

Sir Syed encouraged modernisation where he advocated rationalism and scientific way of thought embedded into a most modern system of education for all Indians in general and Muslims in particular.

For him, the traditional way of thinking and living without taking into account the changes taking in the modern world was the greatest hurdle to progress.

His mission was to modernise the thinking of people through an up-to-date system of education that had developed through enlightenment in Europe.

Sir Syed used the “spiritual” and “worldly” terminology for differentiating the difference between belief and culture so that both were expressed as two separate entities.

He writes: “There are two branches of affairs, one is the spiritual and the otherworldly whilst living in this world. A true religion is not much involved in the worldly affairs except in the main activities which influence morality, these being dealt by religion. Undoubtedly Islam is a true religion adopting this principle.”1

“The perpetual change and development of culture of any society is essential as breathing, bringing in fresh air.”2

“One who made efforts to change and develop the ongoing traditions and culture opposing the trends prevalent in this country, but over time the people comprehended with satisfaction the wisdom and sincerity of these efforts for changing the society, in the end must be appreciated. Just look to the efforts of Raja Ram Mohan Roy for his success in changing the orthodox rituals in his territory, to live more fairly and virtuously.”3

Sir Syed not only insisted upon societal elevation but also propagated harmonising  Muslim beliefs and Muslim societal position with the demands and requirements of the contemporary era. He made efforts to replace outdated norms and blind acceptance with rationality and objectivity.

“Contemporary times have definite influence upon traditions and culture of a society, as well as religion and beliefs. In past times there was a certainty to all the ideas presented to the audience, even if they were strange or vague and non-comprehensive. But the present time is not one of surety: it is the time of doubt and uncertainty. This is the factor that nowadays religion, or specific beliefs, are being jeopardised.”5

Sir Syed has printed a table of concepts or actions of both past and present periods pertaining to the field of religious doctrines out of which the important ones have been mentioned below:

Sir Syed used to explain the difference between the old principles based on traditional thinking and the new principles devised by the Ijtehad (innovation) within the Islamic system.

“The previous religious scholars from older times had made a principle that any work decided to be performed should have a reference of religious authority. Hence, whenever any idea came in the mind, they immediately tried to stretch any religious decree to be associated to this idea. Even when any general principle was adopted by the public, they used to support it with some religious authority. Thus, the present books of Fiqh (Jurisprudence) were collected in all these ideas and thoughts of these scholars. As a result, the whole Fiqh was considered as part of Islam. Hence, any defect or criticism in this Jurisprudence was considered as an attack on Islam whilst the fact is that this defect may not be part of Islam”7

In summary, the concept and message of Sir Syed is to keep these two spiritual and worldly affairs as combined within generally accepted rules and regulations in the contemporary period pertaining to the specific entity.

Thus  Muslims will become successful both in the spiritual as well as the worldly affairs.