As-Sabur The Timeless, The Most Patient, The Patiently Enduring (He Who Times Everything Perfectly) 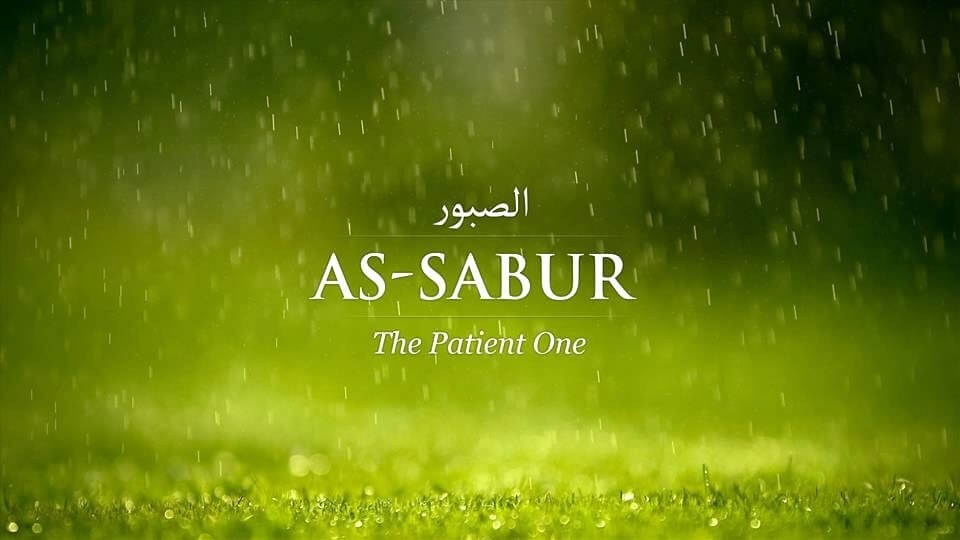 We assert that the most important criterion for the distinction between the attributes of Allah under Asma-ul-Husna depends upon its inclusion either within the verses of the Quran, or mentioned in the authentic hadith of the Prophet, or within some authentic tafsir/commentary of any one of the renowned exegeses.

Hence we submit the following two divisions of the parts A and B on this basis.

A – By and for those who specify this attribute specifically as Number 99 of the attributes of Allah in Asma ul Husna.

Note that points 1 to 4 can also be considered as a part of B.

Allah does not rush nor delay action in an untimely way; rather he causes things to happen in a measured, deliberately considered manner. This signifies that He is not laid back in delaying nor is He impatient in rushing.

1. As-Sabur – He who specifies, not laid back in delaying nor impatient in rushing

In our lives we feel multiple needs, desires, and other emotions, creating conflict both within ourselves and between other people.  These emotions frequently incite the need for an immediate reaction that often does more harm than good. Allah tells Believers to recognise this, and also provides a solution in the Quran:

“O you who have believed, persevere and endure and remain stationed and fear Allah that you may be successful.”

“O you who have believed, seek help through patience and prayer. Indeed, Allah is with the patient.”

The lessons to Believers from the above verses are as follows:

1. Advise each other to practice patience, if you want to be avoid being in loss.

2. Persevere and endure, if you want to attain success.

3. Being patient is one of the primary methods of seeking Allah’s help.

In addition, Allah gives us the benefit of the passing of time to help us resolve our issues and be successful, until our last breath. Therefore, if we reflect, the notion of time is not only provided to us to manage and conduct our affairs; it is also a gift from Allah that enables us to have the opportunity to practice patience as instructed in the Quran, which is a critical pre-requisite of achieving success in both this world and in the hereafter.

As al-Ghazali says: “Al-Sabur—the Patient—is the one that does not let haste move him to carry out an action before its time, but rather decides matters according to a definite plan, and brings them about in delineated ways.” Sabur comes from sabr (patience), and the root means to confine or contain. So to have sabr is to contain oneself from acting rashly. Al-Ghazali also says that when Allah (swt) brings about an action, He does not delay it out of procrastination like a lazy person would, nor does He speed it up out of haste.

Al-Khattaabi (may Allah have mercy on him) said:

As-Saboor is the One Who does not hasten to wreak vengeance upon the sinners; rather He delays that until an appointed time, and He gave them respite for a certain amount of time.

The meaning of the name as-Saboor, as a description of Allah, may He be glorified, is close to the meaning of the name al-Haleem (the Most Forbearing), except that the difference between the two is that in the case of as-Saboor, it does not imply that they are safe from punishment, whereas in the case of al-Haleem, it implies that they may be safe from it. And Allah knows best what is correct.

3. As-Sabur – He Who Times All Things Perfectly

As-Sabur is the One whom haste does not induce to rush into an action prematurely. Rather does He bring matters about in a determined measure, and makes them happen according to definite ways-of-acting. He does not delay them beyond their appointed time as a lazy one might do, and He does not hasten them ahead of their appointed time (that is to say, He does not act precipitately in this respect) as an impatient one might do. Rather does He bring about everything in its proper time, in the manner that is necessary that it be and just as it ought to be. He does all of that without permitting himself to be subjected to a motive force opposed to his will.

As for the patience of man, it is not free of this disciplining because the meaning of his patience lies in the constancy of his intellectual or religious motivation vis-a-vis the motivation of greed and anger. If two opposite motives pull him in different directions and he turns from the one calling him to boldness and rashness and turns to the one that cause a delay, (then) he is called a patient man for he has caused the inclination to haste to be overcome. . In respect of God Most High the inclination to haste is non-existent. God is farther removed from haste than the mortal in whom the motive exists but is overcome. He is more worthy of this name, since one has dismissed from consideration any conflict of motivation and any overcoming of it by effort.

B – By and for those who do not specify this attribute specifically as Number 99 of the attributes of Allah in Asma ul Husna.

The One who is most patient, steadfast, and enduring. The One who is not moved by haste to carry out any action before it’s proper time.

The One who patiently endures and does everything in its proper time and proper manner, no matter how long that may take.

The One who patiently accomplishes each thing in its proper time, in the way it needs to be and according to what it requires.

From the root s-b-r which has the following classical Arabic connotations:

The name Sabûr is not specifically used as a Beautiful Name in the Qur’ân.

Mankind’s share of this attribute is the bountiful reward bestowed upon those who patiently persevere in overcoming the trials, lusts and errors of this world.

The meaning of Islam is submission; to forego one’s appetites, desires and will in the favor of the will of Allâh. To be able to submit, one has to be patient. In Islam, patience is a sign of faith…

Halîm is the patience that arises from a sense of deep serenity, lenience, calm deliberation.

Sabûr is the patience that arises by self-restraint, enduring something without complaint.

5. The meaning of the Name of Allah As-Saboor

The question of whether as-Saboor is one of the beautiful names of Allah remains a matter of ijtihaad and individual scholarly opinion, BUT it is proven in the hadeeth that Allah, has the attribute of sabr (patience).

It was narrated that Abu Moosa al-Ash‘ari (RA) said: The Messenger of Allah (blessings and peace of Allah be upon him) said: “No one is more patient in bearing offensive things that he hears than Allah, may He be glorified and exalted; others are associated with Him, a son is attributed to Him, but He still grants them health and provision.” Narrated by al-Bukhaari (7378) and Muslim (2804).

In what sense is Allah patient? In the sense He sees the people committing sins, trangressing the limits set by Himself but still He is not hasty in punishing them but rather He gives respite to the people that perhaps they will repent seek forgiveness, turning back to Him but when the appointed time (punishment) comes none can delay it nor postpone it.

As Allah said in many verses like Surah Nuh … Noah said  ‘Worship Allah , fear Him and obey me, Allah will forgive you of your sins and delay you for a specified term. Indeed, the time [set by] Allah , when it comes, will not be delayed, if you only knew.’ (71:3,4)

“Al-Khattaabi (RA) said: As-Saboor is the One Who does not hasten to wreak vengeance upon the sinners; rather He delays that until an appointed time, and He gave them respite for a certain amount of time.

The meaning of the name as-Saboor, as a description of Allah, may He be glorified, is close to the meaning of the name al-Haleem (the Most Forbearing), except that the difference between the two is that in the case of as-Saboor, it does not imply that they are safe from punishment, whereas in the case of al-Haleem, it implies that they may be safe from it. And Allah knows best what is correct. End quote from Sha’n ad-Da‘wah (98)

The meaning of the Name of Allah As-Saboor