I was interviewing finalists for a job in Chicago when one of the best candidates unexpectedly withdrew his application. He was a Chinese Muslim.

When he realized that I am a Muslim he shared with me that he is a Chinese Muslim. His father had advised him not to take the job since there might be some repercussions from the Chinese government for him to work with a Muslim organization in the USA.

He told me his family could not fast in Ramadan. He also told me that his home was raided in the middle of the night by the police who took away copies of the Quran and the prayer rugs.

Since he was racially and linguistically Chinese, he added, it is hard to imagine what Uighur people are going through, since they come from an entirely different ethnicity, with different cultural roots and traditions reaching back centuries before the advent of the People’s Republic of China.

Now, China is the only place in the world where Muslims are not allowed to fast. In Xinjiang, formerly known as East Turkestan, Uighurs and other Muslims have been forbidden from fasting since 2017 and partially as early as 2011.

This is only the icing on the cake, however.

Two million innocent people have been sent to concentration camps where they are force-fed haram food.  500,000 Muslim children have been taken by force to orphanages where they are raised as anti-Muslim communists.

One million Chinese Communists are forcibly placed in the Uighur homes as “guests.” This, China has admitted to this. 5,000 mosques have been destroyed, and they are now demolishing Christian churches.

An enormous surveillance state has been constructed in East Turkestan that tracks every movement, every call, every download. Police checkpoints are everywhere in the major cities.  There is no escape for Uighurs.

China supported Burma’s genocide of Muslims and is now laying the groundwork for genocide against Uighurs.

We are calling upon people who care about freedom of religion and the sanctity of human rights to not buy any Chinese-made products during the month of Ramadan: #FastFromChina.

Ramadan is about consuming less and sharing more. So let’s “Fast From China” in solidarity with those who cannot fast in China. If a product is made in China, look for alternatives. Tell the store manager you would like to buy products made elsewhere. Post on social media what you’re doing and why you are doing it, using the hashtag #FastFromChina.

Let us begin a worldwide movement to divest from a criminal regime that abuses its enormous trade surpluses to flout international law. As long as it possesses such economic power, China will feel emboldened to act arrogantly and autocratically. It is our responsibility to take action in solidarity with our brothers and sisters who are being forcibly prevented from enjoying the blessings of the holy month.

God controls the world, we don’t! But we will be asked what did we do when we knew about it. As citizens who are free to pray, free to fast, free to speak, let’s do our duty. More information is available at SaveUighur.org/FastFromChina.

Imam Abdul Malik Mujahid is president of Sound Vision. He leads Burma Task Force as well as Save Uighur Campaign. 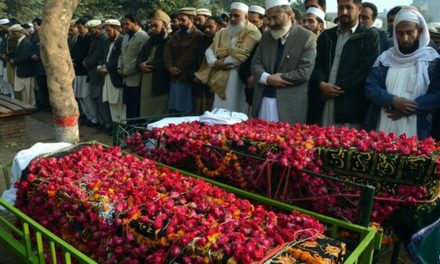