On Sunday 7 April at the St Vincent’s Private Function Room, members and friends of the Rwandan community met for a memorial service of the Genocide against the Tutsi people 25 years ago. Skulls of those murdered.

At this formal and very solemn event, about a hundred people congregated to honour and remember family and friends who lost their lives during those terrible times.

Mr Vivens Mutago, Chairman of the Rwandan Community of New South Wales, welcomed everyone and signalled the start of the mourning period. “Twenty-five years later we are here” Mutago said. “Wounded and heartbroken, but unvanquished.” He then reminded us of the remembrance flame burning at the Kigali Genocide Memorial, which coincides with the duration of the brutal campaign of killings in 1994.

Ladislas Bizimana, a survivor of the genocide, witnessed the killing, torture and rape of family members and friends. Now living in Australia, he has moved forward in his life and encourages others to do the same.

Denise Mwenedata, another survivor, related the difficult times and how she managed to escape the atrocities while other perished around her. The lighting of the candles by everyone present was a very sombre moment all round. This was followed by an observation of one minute of silence.

Following commemoration songs and poems, Paul Power, CEO of the Refugee Council of Australia, spoke of the difficulties that refugees face and how we as a community can help.

Jasmina Bajraktarevic, Community Services Coordinator of STARTTS, a refugee herself, then paid her respects on the day as well.

As part of a panel discussion, Noel Zhabamwe, former chairman of the Rwandan Community of NSW, made reference to difficulties refugees face in his book One Thousand Hills. Noel Zhabamwe, former chairman of the Rwandan Community of NSW.

Dr Ari Lander, Education Offices at the Sydney Jewish Museum, spoke of the genocide and Holocaust of the Jewish people.

Although many Tutsi’s had forgiven Hutu’s for what happened, at a brief Q & A afterwards, Philip Feinstein posed the question of a possible genocide happening now in Burundi and asked how it could be avoided. “Unfortunately there was no-one with a definitive answer” he said. Philip Feinstein at the event.

Despite the occasion, the day ended on a positive note with people networking and comforting each other.

And printed on a big board were the words: NEVER AGAIN TO GENOCIDE 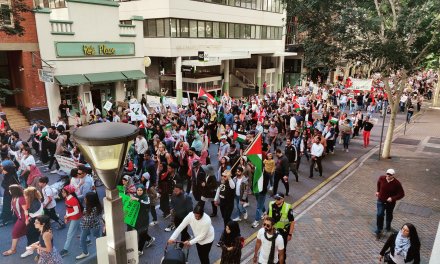