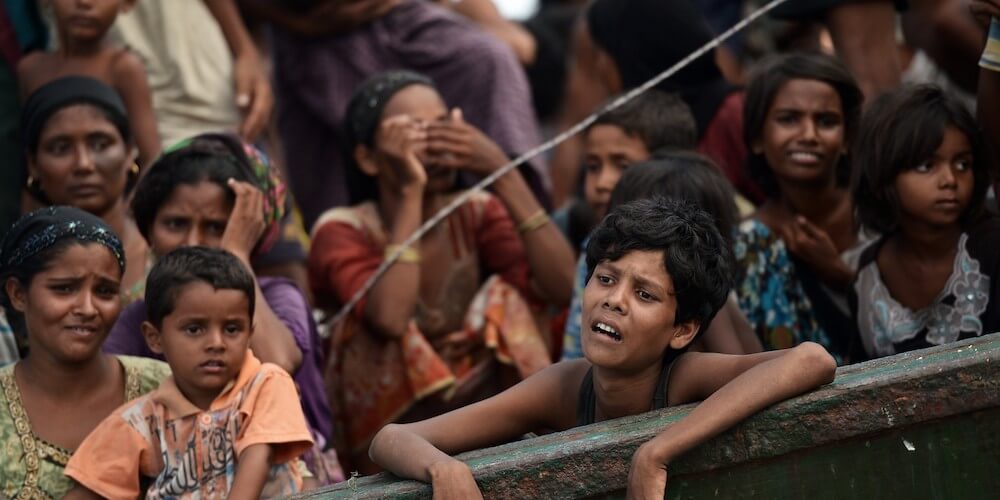 When the rest of the world, including United Nations (UN) called “textbook ethnic cleansing” of Rohingyas in strife-torn Rakhine State of Myanmar, Head of Myanmar Armed Forces, General Min Aung Hlaing has reiterated his baseless claim that Rohingyas are illegal immigrants from Bangladesh, and have no roots in Rakhine, despite living there for centuries.

In November 2016, Mr Yanghee Lee, the UN special investigator on Myanmar, noted that the Myanmar Government  wanted to expel its entire Rohingya population from Rakhine. If the UN or the world community took this matter seriously and acted timely to ensure citizenship of Rohingyas then we probably could have avoided the catastrophic massacre and mass exodus of Rohingyas to Bangladesh now.

It seems the current wave of violence is aimed at the sole purpose of ethnic cleansing of Rohingyas either by brutal killing or driving out from Myanmar to Bangladesh in the pretext that they are not Rohingyas but Bangalis.

If they succeed in making Rakhine free from Rohingyas, they will try to fool the whole world that an ethnic minority living in Myanmar since the 8th century are Bangladeshis and they have no root in Myanmar.

If this ridiculous logic of the junta is applied to Australia, New Zealand, Canada, and USA all non-indigenous citizens must be killed if they don’t go back to different parts of Europe and Asia where their ancestors came from.

Historically Rohingyas are the Arakanese locals who settled in the Arakan state of Burma (now called Rakhine state of Myanmar) as early as the 8th century.

In 2013 United Nations declared them as one of the most persecuted minorities in the world.

Although the Rohingyas lived in Rakhine for many centuries they were deprived of the nationality under the 1982 Burmese citizenship law imposed by the military government. They were also restricted from freedom of movement, state education and civil service jobs.

Recently, UN officials and Human Rights Watch have described Myanmar’s persecution of the Rohingya as ethnic cleansing and genocide.

As a University student, in 1978, I was a part of a relief team that provided humanitarian support to the Rohingya refugees in Cox’s Bazar area of southern Bangladesh.

Clearly the tension between the Rohingya Muslims and majority Buddhists has been an ongoing issue fueled by repeated Government attacks and intimidation to drive out the Rohingyas instead of genuine initiative to settle the matter peacefully.

In wake of 2016 Anan Commission recommendation for granting Myanmar citizenship to Rohingyas the current army crackdown is a vile attempt to defy the UN so that the question of citizenship is buried forever.

The United Nations reported that General Min Aung Hlaing is the mastermind of this latest massacre deliberately targeting civilians in Kachin and Shan State where  Rohingya villages have been set on fire and civilians shot at when they tried to run away and women have been raped.,

In spite of the media coverage of wide spread violation of human rights, genocide and ethnic cleansing of Rohingyas by the security forces of Myanmar, almost universal condemnation by major Western and regional leaders, sadly the UN secretary general Antonio Guterres has said the government of Myanmar until now has been completely deaf to the UN requests.

The stories of over 450,000 Rohingya refugees in Bangladesh are most tragic, horrific and heartbreaking. Many of these people have fled from their houses empty handed to save their lives from the killing machine of Myanmar. They walked through the treacherous mountains, dense jungles, muddy wetland for many days without food and crossed dangerous rivers only to skip the persecution.

According to the aid agencies, due to the arrival of so many refugees in such a short time and limited supply of relief items and emergency supplies the refugees have no proper shelter, sanitation, enough food, water and medicine. Many of the children are sick and suffering from trauma and malnutrition and are likely to die due to lack of medical attention if necessary help does not arrive soon.

The Myanmar Government led by Nobel Peace Prize winner Ms Aung San Suu Kyi did not bother to implement the Anan Commission Report of 2016. Instead she and her military partners continues systematic oppression on the Rohingyas and now they have been using its security forces to drive out all the Rohingyas from Rakhine and push them to Bangladesh.

The pretext of the latest indiscriminate killing of civilians, rape of women, and burning of thousands of houses is the alleged attacks of some member of militant Rohingyas on several police stations with knives and sticks. Clearly, a very well orchestrated state drama to create a pretext to justify the hidden agenda to kill or get rid of all Rohingyas.

The UN must find a way so that Rohingyas could return to their ancestral homes in Rahine and live there with peace and dignity. Anything less than that would rewarding the junta for their genocide and crime against humanity.

If diplomacy fails, and Myanmar does not agree to take Rohingyas back to Rakhine with citizenship and autonomy, the world would have no alternative other than creating a Safe Heaven in the Rakhine state under the UN Peacekeeping Forces from neighbouring countries on road to an independent state for the Rohingyas.

As a regional power Australia should play a leading role is solving the centuries old problem in Rakhine as it led the initiative for the creation of independent East Timor.

The view expressed on this article is exclusively of the author, and do not reflect that of any organizations.