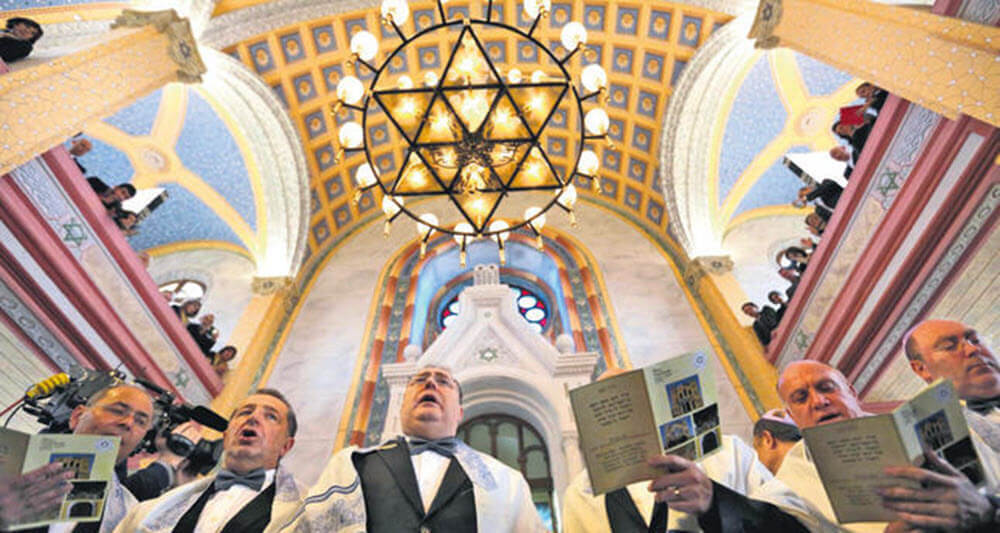 The reopening of the Great Synagogue in Edirne was hailed by Turkey’s Jewish community, which flocked to the opening of the historic temple

Renovated over a four-year period and funded by the government, Kal Kadoş ha Gadol Synagogue was reopened on Thursday. It will serve as both a museum and as a place of worship as a part of Turkey’s latest efforts to win back the hearts and minds of minorities that long suffered from suppressive policies in the past.

For the government, the synagogue is a symbol of peaceful coexistence of different faiths and cultures, which the country has long been synonymous for except occasional ultranationalist riots.

For Jews, it is a restoration of tolerance. İshak İbrahimzadeh, head of Turkey’s Jewish community, praised the government and President Recep Tayyip Erdoğan for “making a change” for the community.

İbrahimzadeh said Turks and Jews had shared the same country and fate but were “divided and alienated” over time. “Now we see the headlines that tolerance was rebuilt,” he said. İbrahimzadeh stressed that Jews were subject to unfair accusations and branded as sinister people plotting against the state in the past. “We always felt obliged to defend ourselves against a discourse of hatred depicting us as enemies and traitors, and we repeatedly underscored that we were loyal citizens of this country. We were forced to isolate ourselves in time and lost our hope for a better future. Today, the opening of this synagogue and this ceremony is the best response by the state against the dividing discourse targeting Jews. This is a turning point for us. Our state eliminated prejudice toward minorities by returning their rights, their properties. We have a long way to go, but we appreciate that we at least have a way to move forward,” he said.

İbrahimzadeh said that he spoke to Erdoğan while he was prime minister five years ago. “While speaking on minorities’ rights, [Erdoğan] said, ‘We have to give everyone their rights,’ and I thought it was the usual political statement. Yet, it was also he who pioneered the return of rights to our community, return of properties and extra rights in education , things that once seemed impossible to be returned. Mr. President, you created this change, and we thank you for this,” he said.

Arınç said Turkey has accelerated its democratization in recent years and that communities of different faiths and cultures live freely. He also said that Turkey both restored historic places of worship and returned properties to minorities.

On the strained relations between Turkey and Israel, Arınç said it was different than relations between communities. “Our relations with Jews did not start with Israel’s foundation. Our country has always been a haven for Jews from around the world, be them those fleeing Spain 500 years ago or those fleeing the Nazi regime in Germany in the 1930s. They adopted Turkey as their home, became an inseparable part of our culture and made great contributions to our country,” he said. Arınç highlighted Turkey’s efforts to fight anti-Semitism and said Turkey contributed to the Holocaust Remembrance Alliance and projects in the initiative to fight anti-Semitism. He also stressed that Turkey also made a significant donation to the Auschwitz-Birkenau State Museum in Poland. He wrapped up his speech with a call to the Jewish Diaspora around the world. “We have a population of 78 million ready to embrace you if you want to live here,” he said.

The restoration of the synagogue is part of the government’s efforts of democratization that focuses on the return of rights to neglected minorities, from Jews to Greeks. Many properties have been returned to these minorities decades after their forceful confiscation by the state, while the government also pursues a policy of restoring abandoned historical buildings such as the synagogue in Edirne.

Representations of Islam and Muslims in the Western Media