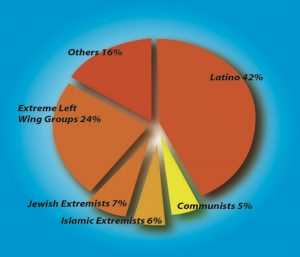 A valuable addition to the favourites list of every enemy of bigotry and racism, is the American website loonwatch.com. It describes itself in the following terms;

“ Loonwatch.com is a blogzine run by a motley group of hate-allergic bloggers to monitor and expose the web’s plethora of anti-Muslim loons, wackos, and conspiracy theorists.

While we find the sheer stupidity and outrageousness of the loons to be a source of invaluable comedy, we also recognize the seriousness of the danger they represent as dedicated hatemongers. And so, while our style reflects our bemusement, our content is fact checked and our sources well vetted making sure loonwatch.com is a reliable educational – if entertaining – resource on the rambunctious underworld of Muslim-bashing.”

It is worth referring to the website of the FBI of the United States :  www.fbi.gov/stats-services/publications/terrorism-2002-2005 which presents a table of terrorist incidents in the USA from 1980 to 2005. Presented as a pie chart, this is the picture:

The Loonwatch article puts it very clearly: “The Islamophobes claim that Islam is intrinsically a terrorist religion.  The proof?  Well, just about every terrorist attack is Islamic, they retort.  Unfortunately for them, that’s not quite true.  More like six percent.  Using their defunct logic, these right wingers ought now to conclude that nearly all acts of terrorism are committed by Latinos (or Jews).  Let them dare say it…they couldn’t; it would be political and social suicide to say such a thing. Most Americans would shut down such talk as bigoted; yet, similar statements continue to be said of Islam, without any repercussions.”

Section 100.1 of the Criminal Code defines a terrorist act as ‘an action or threat of action’ which is done or made with the intention of:

advancing a political, religious or ideological cause; and

Action will only be defined as a terrorist act if it:

creates a serious risk to public health or safety; or

seriously interferes with, seriously disrupts, or destroys, an electronic system.

“There is no such thing as Islamic terrorism, but there have always been Muslim terrorists. Today there are many alienated extremists who rely on their own resort to violence in protest against perceived injustice, rather than relying on the jihads of akbar, saghrir, and kabir, with the help of Allah and ecumenical cooperation in peacefully building a better world. In effect, these extremists rely on and worship themselves. They are exhibiting the most serious crime condemned in the Qur’an, which is the root of almost all the other crimes, namely, arrogance. They are committing the crime of hirabah, which is the attack on the very roots of civilization, and justifying it in the name of Islam. There can be no greater evil and no greater sin. If there is to be a clash of civilizations, a major cause will be the muharibun, those who commit inter-civilizational hirabah.

There is only one effective cure for such hirabah. This is cooperation by the heretofore silent majority of both Muslims and those of other faiths in a jihad to marginalize extremism by putting their own houses in order through the pursuit of peace through justice. “Hirabah versus Jihad. Dr. Robert D. Crane , President The Islamic Institute for Strategic Studies. Director, Legal Division at the American Muslim Council. [ http://www.irfi.org/articles/articles_301_350/hirabah_versus_jihad.htm] Kangaroo Made Into Jungle King