While Australian Muslims have been building bridges through interfaith Iftars with the rare confluence of major Abrahamic festivals, Ramadan, Easter and Passover falling in April 2022, Palestinian Muslims are continuously being brutally attacked inside the Al-Aqsa Mosque while praying during Ramadan with hundreds injured and arrested by the Israeli occupation forces.

The Arab League on Thursday 21 April condemned the Israeli restriction on Muslims for their right of worship in Jerusalem’s Old City, while allowing ultra-nationalist Jews to enter the sacred site under police protection. Israeli police stand in front of Muslim women praying with the Dome of the Rock in the backdrop, as a group of religious Jewish men and women visit Haram al-Sharif.

It called on the Jewish state to end Jewish prayers inside the Al-Aqsa Mosque compound in occupied East Jerusalem and warned that such actions were a flagrant affront to Muslim feelings and could trigger wider conflict.

The Arab League called an emergency meeting to discuss what the it termed “illegal Israeli policies and measures” in Jerusalem.

“Our demands are clear that Al-Aqsa and Haram al Sharif in all its area is a sole place of worship for Muslims,” Jordanian Foreign Minister Ayman Safadi told reporters after an emergency meeting of the league in Amman on Thursday.

Regular videos have appeared showing dozens of Israeli police brutally hitting old men, women and children and firing stun grenades on worshippers inside the mosque continuously now for over a week.
The Haram al Sharif compound is forcibly evacuated of Muslim worshipers during Ramadan several times in a day with groups of Jewish visitors in their religious clothing allowed in, protected by Israeli armed forces.
Israel is holding more than 5000 Palestinian political prisoners in its jails with more than 500 being held without trial whose detention renews after every six months. Around 200 of them are children.
Several hundred arrested during this Ramadan from Al-Aqsa Mosque will be incarcerated without charge for months if not years under the occupation authorities’ inhuman treatment. 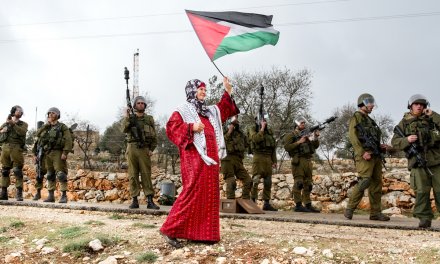