Bosnia, Ukraine and trauma without end

Wednesday 6 April 6 is the 30th anniversary of the start of the Bosnian War, part of the breakup of the former Yugoslavia which caused bitter fighting, indiscriminate shelling of cities and towns, ethnic cleansing and systematic mass rape.

Some 100,000 people died and over 2.2 million people were displaced. It was the biggest refugee crisis Europe had experienced since WW2 and the Siege of Sarajevo and the Srebrenica massacre became iconic of the conflict.

Izeta Zecevic is a survivor. I met her in 2002, making a film about women as victims of war as part of a project for the International Red Cross and NSW Law Week. We were both quite new in Australia and became friends.

I’ve always remembered the traditional Bosnian baclava and thick dark Bosnian coffee she made me while she told me her story but I remember more vividly what she went through during the war in Bosnia and I have worried about her and other survivors from Bosnia and so many other places as we’ve watched the horrors of what is happening in Ukraine unfold.

Unexpected terrors which remind me daily of Izeta telling me “No one ever expects war to come to their city.”

Working through Izeta’s story with her for Recipes for Ramadan has reminded me what that war was about and why we need to remember.

Bosnia has never recovered and neither have many of its people. We shouldn’t expect that Ukraine or other places that have been violated and scarred in similar ways will either. The present is still haunted by the past.

Izeta is originally from Doboj in central Bosnia. Doboj was heavily shelled, ordinary civilians were killed and hundreds were wounded and maimed. All the mosques were destroyed, and homes were looted and destroyed too.

People were detained and subjected to inhumane conditions, beatings, torture and forced labour. Ordinary civilians were killed and women raped. There were mass executions in the city’s prison and in the military barracks in a local village, and a school was used as a rape camp… The violence and fighting went on for three years.

“When I see people fleeing in Ukraine with children and plastic bags, leaving their husbands, my soul is crying,” she told me recently. “Watching Ukraine reawakens many old traumas. I am worried for many Bosnians here who are still struggling and need support and I am worried by renewed nationalism in Serbia. My soul cries for Ukraine and for Bosnia.”

Before the war Izeta worked in a bank. Her husband Fahir was a journalist. They had two teenage sons. She never imagined war would come to her city or that she and her younger son would be separated from her husband and oldest son for two and a half years, not knowing if they were safe and for long periods not knowing where or how they were.

“It is hard to describe the feelings you have when you lose everything in one day… Becoming a refugee is something no-one plans for in their lifetime and for everyone it is a hard time. I say ‘hard’ but it is so much more. You lose family members, friends, home, wealth, your homeland. And there are a thousand questions you ask yourself. Why has it happened to us and why do we never know what awaits us tomorrow? In one second, life changes. The only way I can describe it is to say it’s like how sunny days can turn stormy in moments. The sky becomes black and the lightning is terrifying. That’s the only way I can describe in a simple sentence the day we had to leave our home under cannon and bombshells…  and then we were separated.”

Izeta considers herself and her family the lucky ones. She learnt English in Australia and worked for 15 years for a number of Migrant Resource Centres and agencies, supporting migrant women and families from refugee backgrounds including asylum seekers living in the community.

A Justice of the Peace, she is the secretary at Auburn Small Community Organisation Network (ASCON) and continues to run the Bosnian Senior and Disability Association which she founded and chairs. The group meets weekly and includes many widows and victims of the war in Bosnia. Many are still haunted by the past.

For 30 years, Izeta says, many Bosnian people have tried to correct the idea that the war in Bosnia was a civil war or a war of religion between religious groups.

“Not dissimilar to Ukraine now, we see it – the world sees it – as an act of aggression and genocide by Bosnian Serbs and Serbia who wouldn’t accept Bosnia as an independent country. Politicians stirred up ethnic hatred which led to ethnic cleansing of people who had no way to defend themselves.”

Bosnia had been multicultural for centuries and Orthodox and Catholic churches and mosques existed side by side. People of different religions lived as neighbours and families with more than 500,000 mixed marriages before the war: Muslim-Catholic, Muslim-Orthodox, Catholic-Orthodox.

In the capital city of Sarajevo, every day at 12:00 noon you could hear the ezan call to prayer from mosques and the bells from Catholic and Orthodox churches and Jewish synagogues.

As Izeta calls it “A religious orchestra respecting differences together – something nowhere else in the world.”

To read more of Izeta’s story, to be reminded of events that led to the Bosnian war and the fears now of growing Serb nationalism ahead of elections in October, go to https://recipesforramadan.com/recipes/izetas-bosnian-baklava/ where you will also find Izeta’s recipe for her baclava. “The baklava is really much more than our favourite sweet pastry. Always when I prepare this sweet, my memory goes to days when we were happy and enjoyed our time with friends. It is linked in our hearts, Fahir’s and mine, to events and people and to the memories of where friendships started and can never be lost because the baklava connects me to people I hold dear in Bosnia and in Australia.”

You can also hear Izeta on ABC Radio National’s Soul Search on RN at 6-7pm on Sunday April 3. Repeated Wednesday April 6 at 11pm and Thursday April 7 at 12pm. https://www.abc.net.au/radionational/programs/soul-search/. 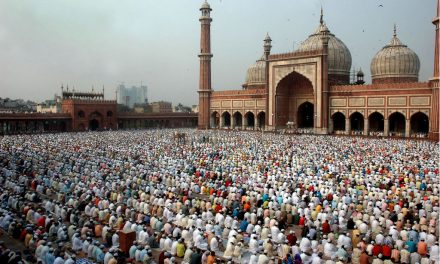