According to the Quranic stories, one day Allah had called upon his angels and said that He was going to make his vicegerent on earth. The angels wondered why He was going to make someone who would spread corruptions and spill blood. They were already there to glorify Him with all praises and declare his perfections. Allah simply replied what He knew they knew not (refer to Quran 2:30).

Allah taught Adam (a) the names of all things. He asked the angels to name those things, which they failed. Then Allah asked Adam (a). He named them correctly. Allah could have easily taught Adam (a) such beautiful praises that would have made the angels speechless. Instead, Allah showed that his vicegerents had very different roles and purposes. I call it Allah’s human project.

The Adam (a) had been created to be sent to the earth. But he was asked to live in paradise. In our mundane practices, it felt like someone has a job posting at a branch office. But he is asked to spend first few weeks at the head office for the orientations. If we consider that the stay of Adam (a) in the paradise had been the orientation for Allah’s human project on earth, we must realise what training Allah wanted to give Adam (a) before sending him on earth. It has been our primordial lessons.

Allah said in the Quran that the purpose behind the creation of mankind and Jinn kind is to worship him alone (refer to Quran 51: 56). One would expect that Allah would have taught Adam (a) how to pray? How to fast or how to praise Him properly, which would be truly pleasing to Him? Instead, He simply said to Adam (a), “Live in paradise with your wife. Go, eat, and drink whatever you both want and from wherever you both want. But there is only one condition that do not go near this particular tree (refer to Quran 2:35).”

At the end, Adam (a) and his wife were human. They made the mistake. Allah taught them how to repent and accepted their repentances. It appears to me that Allah wanted to give one simple message to Adam (a) and his wife that life was nothing but a choice. Allah would send them the guidance about the right and the wrong choices, but the choice would be their responsibility.

If my proposition is true, it takes us to a very difficult question of free will versus fate and destination. How much I’m free to choose my actions versus how much I’m destined to my actions.

It appears that I’m only performing according to the pre-written scripts. If so, how can I be responsible for my actions? Personally, I don’t have the answer. However, a few years back a personal experience taught me that pre-written and pre-destined were not the same thing.

In 2012, suddenly I got an opportunity to teach at a university as a part-time academics. I was supposed to give 12 lectures and made a final exam. I had no extra tutorial time allocated for the students. However, I told them to see me in my office if they had any questions. The day before the exam, I received some desperate emails from a student, who needed to see me urgently for her preparation. I asked her to come to see me at my office. She came rushing.

I found her visibly nervous at the point of breakdown. She had been trying to understand one topic but failed. Now she was anxious that she would not be able to answer any question in the next day exam related to that topic. When she told me the name of the topic, I gasped in helplessness inside me. She had already spent the whole night and now we would spend another two hours because the topic was complex. While the matter of fact was that I had not made any question related to the topic for the exam.

That was the first time I realised that there could be many times in one time. We can be all present at one moment but living in the different times. What was future for my student, was past for me. At that very moment in my office, we two were at two different times regarding the exam. I’ve also realised that something becomes past to me when I know the results of it, irrespective of the actual time of the event. Following the same logic, if I had had exact future knowledge of how the students would respond in the exam, I would have given the mark at the time, when I made the questions instead of waiting for the exam to finish.

Suddenly it makes also sense to me that in the Quran, Allah talks in the past tenses most of the time. We live inside the time, but Allah lives above and beyond of our time. What is future for us is past for Him. Most probably instead of our predestination, the hadith explains rather how perfect Allah’s knowledge is about our past, present, and future.

In my life, many times things happened to me good or bad that I was not at all responsible for them. I was simply in the right place at the right time or in the wrong place at the wrong time. An easy example could be that imagine a drunk driver hitting a car from the behind when the other was waiting at the traffic light. As a society, we may punish the drunk driver as much as he deserves. As long the other driver is alive, he may get the compensation as much as he deserves. The fact remains that he would go through the sufferings that was not of his making. In this case, his unfortunate destiny is a fact than faith. Another hard reality is if the second driver were dead in the accident, there would be no human way to compensate him personally. He would need a hereafter.

Our religion tells us that we are only responsible for our action and intentions. The results come from Allah. In other words, our actions and intentions belong to our choice and free will, but the outcomes are in the scopes of our fate and destiny. For the believers, they can have their comforts and solaces that they will always get their rightful compensations if not here, then in hereafter. 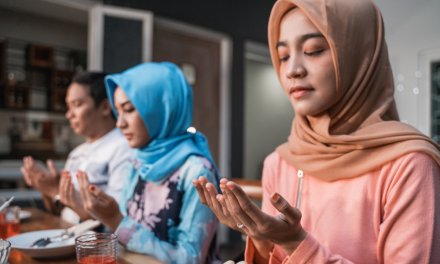 Duties as a Muslim immigrant