Our atheist friends had been angry with law (i.e., Sharia) giver God. They went against creator God. Creation without creator appeared going against common sense. They asked science to explain and got the famous theory of evolution in return. The problem is that the evolution cannot happen out of nothing. It had needed someone and some processes to create the life in the first place to begin with. For the believers, the problem remains as divisive as ever.

I’m a marine geologist. I have done many offshore marine expeditions to collect sediments from the bottom of the oceans. During any expeditions, once we collect the sediments, give their samples to our micro-paleontologist colleagues. They investigate the fossils in the sediments and tell us their geological age. When we think about fossils, the first things come to our mind are dinosaurs. Many micro-organisms also left fossils. Any small amounts of sediments contain many of those microscopic fossils. Some of those organisms had lived in the past and became extinct. Some of them are still living today. The stories of their evolution; their appearance, thriving and extinction on earth, tell us the age of the sedimentary layers containing those fossils. For me there are several facts of the evolution that I use for my regular work:

None of these facts contradicts with the Quranic knowledge. The main point of contention between religion and evolution theory is whether these chronological appearances had been the results of the transformation of one species into another or simply the will of God, who had created all species independently. According to the Quran, the whole creation had not happened at once but in six (stages of time) days. The human was created at the end.

Fossil records are incomplete. Soft body parts do not fossilize. We will never get the full picture of the changes during evolution. The knowledge gaps provide a fertile ground for doubts and debates. Whatever the case is, we must understand that the domains of science and religions are different. The evolution theory talks about our anatomical and biological bodies. While religions talk mainly about our mental and spiritual realities. Science examines the material basis of our mental faculties. While religion describes the spiritual basis of our mental realities. For religion, how we arrived at our modern-day biological body shape is of least importance. Science seems to be equally vague, at least at this stage, about the beginning of our species as a moral and mental being.

The science tells us that we, human had had two beginnings: anatomical and cognitive or mental (1). The fossil records tell us that around 200000 to 150000 years ago, our species – the modern human (Homo sapiens) appeared on earth at some corner of the horn of Africa. They had nothing especial from other species of our ‘Homo family’ except their distinctive modern human anatomy. Because of food scarcity and harsher climatic conditions, they had been trying to get out of Africa, but were not successful. Then between 100,000 to 70,000 years ago, for some unknown (to science) reasons, something happened. Our species acquired two capabilities:

These two capabilities made them cooperate at a large scale. Thus, our species outsmarted all other species and became the master of the world. Their mental capabilities of learning and abstract thinking helped them design better their tools (i.e., hunting gears, boats) and technologies and get out of Africa for survival. This was the time of last glacial period, when the weather was drier and colder, and the sea level was much lower than today. Many parts of the world, which are now divided by the seas (i.e., Tasmania and mainland Australia) were land connected or covered by very little water. Our forefathers had had two possible exit routes: through northern Sinai Peninsula or through southern Arabic Peninsula across the Bab al-Mandeb strait. Recent scientific evidence suggests more in favour of the southern exodus (2).

The Quran tells us the stories of Adam (a) who was the first man and the first prophet on earth. According to the stories:

In the Quran, Allah said:

Some classical interpretations refer “the period of not worthy of mention” as the human gestational period when he or she is not a complete person. However, the pregnancy is only nine month long. The word for the time span mentioned in the verse is supposed to be very long at a scale of hundreds of thousands of years.  Some other interpretations refer this period as the past period when the humankind had yet been created. Can it be that the time span between the first appearance of our species Homo sapiens, who were biologically and anatomically like us, and the appearance of mental faculty and language in our species (i.e., the creation of Adam (a) among our species) is referred in the above-mentioned verse?

According to the Quran, the creation of the human is also two-step process: creation and giving shape.

“Surely, We created you, then shaped you, then said to the angels, “Prostrate before Adam,” so they all did—but not Iblis, who refused to prostrate with the others” (Quran 7: 11).

We think that these two steps happened at once one after another. Allah can do whatever He wills. But do we really know how long was it between these two steps? One thing we know that the cosmic days and its time-span mentioned in the Quran are very different than our worldly days and time scales.

Can it be that when Allah decided to create his vicegerent on earth, chose our species Homo sapiens and made Adam (a) in their likes. Allah sent him among their midst when some of them had been trying to get out of Africa and found themselves in the Arabic Peninsula. As far as the religious narrative goes, before sending Adam (a) to the earth, Allah made Hawa (a) from his rib bone, – in some ways conceptually comparable to the modern-day reproduction through stem cells – and sent them together after a brief stay at the paradise.

“O humanity! Be mindful of your Lord Who created you from a single soul, and from it He created its mate, and through both He spread countless men and women. And be mindful of Allah—in Whose Name you appeal to one another—and honour family ties. Surely Allah is ever Watchful over you” (Quran 4: 1).

Thus, began the mental and cultural revolution of our species, that we know happened around 100000 to 70000 years ago. Allah knows the best.

Author’s note: Personally, I prefer rational thinking instead of scientific proof to talk about faith. I do not think that material sciences and religion can prove or disprove one another. Nevertheless, recently I have been reading scientific literatures about the origin of our language. It appears to me that the stories of our beginning described in the Quran have also many common and complementary things. I simply wanted to share that very eureka feeling with my readers. 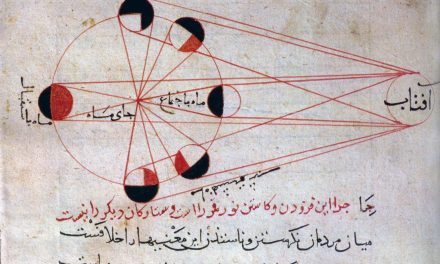 Celebrating Eid with a heart