One hundred new Australians received their citizenship in the main hall at the Islamic College of Brisbane on 16 October 2021  in a ceremony hosted by the year 10 students from the  College dressed in their school uniform and attended by 250 people. The students set up the stage for the officials which included a member of the three levels of government and  welcomed the invited guests and conferees to their seats, ensuring that the overheads for the National Anthem and the pledges were projected for the audience.

The highlight of the event was when the ICB primary choir performed the National Anthem and We Are Australian.  They also sang the final song by inviting the children from the audience to join them.

The presiding officer,  Dr Jim Chalmers joined the students at the end of the ceremony and congratulated them for an excellent effort. Sumptuous afternoon tea was provided and served to the guests by the year students After the ceremony.

The event was enjoyed by all and the school received many congratulatory comments praising the students of the school for their excellent efforts in community work.

The Australian Home Affairs Officials who attended the ceremony also took photographs for their own publications. The entire event was live-streamed by Academy Alive. Janeth Deen is a descendant of the first five Muslim families to settle in Brisbane. She is a retired secondary teacher and is a voluntary community worker. She is the Director of the Muslim Charitable Foundation, Trustee of the Holland Park Mosque, President of The QLD Multicultural Council, co-founder and President of the QLD Muslim Historical Society. Curator of the QLD Muslim Museum and Board Director of the Islamic College of Brisbane. 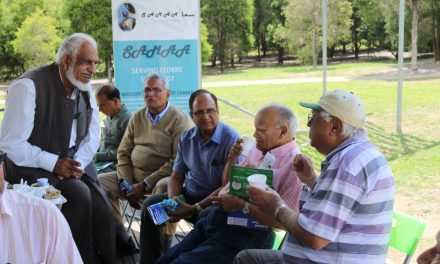