Mark Willacy’s Rogue Forces is imperative reading for its exposé of Australian SAS war crimes in Afghanistan and the systematic cover-ups at varying levels of the Australian Defence Force operations.

Willacy’s window on war crimes is narrow, focusing on three SAS members of Squadron 3; Soldier A, Soldier B and Soldier C who executed innocent Afghan farmers in 2012.

It makes one wonder about the breadth of horrors that would inevitably be disclosed if ALL the Australian and Allied windows were flung open on the 20-year invasion and occupation of Afghanistan.

As with his 4 Corners documentary, Killing Field, Willacy brings us face to face with participants; the deviant killers, their fearful complicit colleagues, the moral injury and inner agony of whistleblowers and the forever shattered lives of the Afghan victims and their grieving families.

Soldiers A, B and C are bullies and killers who are variously described by their colleagues as ‘unhinged, psychopath, rogue, toxic, monster, thugs, sadist, mad, animal, bully, egotistical sociopath, shoot’ em up boys’.

“The rhetoric has always been that you are looking for similar features to a psychopath,” says a psychologist who was involved in screening Special Forces candidates.’

These SAS deviants ride high on the heroic SAS reputation and hubris wrapped in impunity. Their war crimes include the cold-blooded executions of unarmed, wounded, and disabled Afghan men and boys, the ritual of blooding that coerced the first kill of rookie soldiers, a kill count that was indifferent to innocence, the desecration of the bodies of the Afghan dead, the appalling racism and brutal beatings, the massacre at the Tractor Job, the planting of guns, grenades, radios and battle-bras on murdered innocent farmers.

Don’t for a moment think such dishonourable behaviour is about a few bad apples.

War crimes are inherent to and hidden away throughout ANZAC history; note the same Australian racism, bloodlust, the brutal atrocities at the Sarafand Massacre 103 years ago in Palestine.(http://www.palestinechronicle.com/the-sarafand-massacre-and-cover-up/)

There’s nothing noble about a ‘code of silence’ – it is a synonym for covering up crimes and corruption. The Rogue Forces cover ups, from the killing fields to ADFHQ spawned the impunity for ongoing barbarism.

On the field it was common knowledge that the mandatory photos of the kills were falsified by planting weapons on the innocent dead to look like combatants and added to fabricated reports ’to justify lethal force’.

Inquiries into Afghan complaints were implicated in cover-ups; ‘We reported these things…the perpetrators were not punished, they were decorated.’

The Brereton Inquiry exonerated the brass of ‘direct responsibility’. Yet the book challenges the leadership ‘ignorance’ of war crimes.

The ultimate merit of Rogue Forces is Willacy’s going beyond the crimes to explore complicity in the code of silence and its high personal cost to decent soldiers.

Willacy points out the reasons why decent fellow soldiers remained silent; a herd compliance based on a loyalty to the SAS that overrode the Geneva Conventions, fear of isolation, losing a valued career, and justified fear based on psychopathic intimidation;

“I genuinely believed that if they’d have had the opportunity if we’d raised certain things, that they had the capability- they’d already proven it- to put a bullet in the back of your head and just turn around and say it was the Taliban,’

Australia has a code of silence culture. Children learn it at school, and all of us are familiar with the code- ‘Everyone hates a dobber or squealer, or rat, snitch, traitor.

The code is rife; it’s in the military, the police (deaths in custody), the government, the churches, the banks, the media, sport, education, and among victims of domestic violence and sexual abuse.

Despite the depravity, from the ignoble darkness Willacy salvages the human soul – the repository of and the verve of our conscience, compassion, and morality and its insistent pressure on us to do the right thing;

‘I could have and should have done more. Speaking up may have minimised or prevented more unnecessary and unlawful deaths. I hold responsibility for my silence and inaction.’

Willacy probes among his whistleblowers the effects of moral injury that their silence inflicts; PTSD, sleeplessness, nightmares, excessive boozing, a deep well of shame’, ‘unquenchable guilt’, rage, grief, agonising memories, violence, pointlessness, feeling compromised, loss of trust in self and others, self harm, attempted suicide, self-alienation -‘not the person I thought I was’, ‘I couldn’t look at myself anymore.’

By having reached a point ‘where the truth is more important’ than self-interest, each of the whistleblowers are freed from the code’s in-built fears to testify to the truth that it was an unjust war, that the SAS violence was worse than the Taliban, ‘and see that we were the guys in there murdering and invading and not there to do something honourable.’

This is the point of courage, truth and integrity regained.

And we too must hold fast to our responsibility to speaking out and to act. 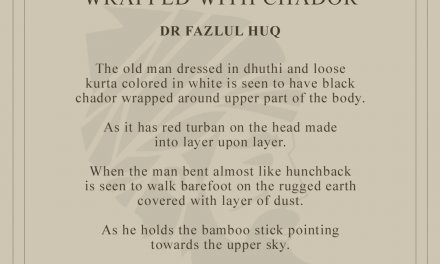 The Old Man With Turban Wrapped With Chador