Despite the apprehension that the Olympic Games would not go ahead, COVID never succeeded and Japan began their dream of hosting the games.

Thomas Bach, the President of the International Olympic Committee, opened his address by saying “Today is a moment of hope and the Olympic Experience will make us all very humble.”

Although the stadium was almost empty, the spectators there stood transfixed when he added: “By standing together in solidarity, all athletes can become Faster, Higher, Stronger and Together as one.” And then Bach proudly added “Although the pandemic has forced us apart, like in a dark tunnel, this feeling of togetherness can be the light at the end of this tunnel. The Olympic flame makes the light brighter for all of us.”

He then expressed sincere thanks to the host city Tokyo and the Japanese people and invited the Japanese Emperor to officially open the games.

The entry of the athletes was a wonderful spectacle. Like all previous games, Greece was the first to enter the arena. Then, according to the Japanese alphabet, all the other countries entered with the host country at the end. The biggest applause came for the group of refugee athletes who marched in under the Olympic banner.

When the Australian team entered it was led by swimmer Cate Campbell and basketballer Patty Mills, our first ever Indigenous flagbearer. Most of our team stayed back as we had strenuous sporting activities the following day.

It was a very proud moment for Australia as Brisbane had just been awarded the 2032 games by the Olympic Committee the previous day. And sitting among the few spectators was a smiling Annastacia Palaszczuk, Premier of Queensland.

And so it was quite apt that our own Keith Urban was amongst the international entertainment for the evening.

And so athletes from all countries marched into the stadium carrying their flags and dressed in their colourful outfits. The atmosphere was exciting and fun with smiling faces all round.

Although there was a beautiful sight to see athletic representation from both Israel and Palestine marching, the commentator reminded the world of the atrocities at the Munich Olympics in 1972 when 12 Israeli athletes were kidnapped from their dormitory and brutally murdered.

A moment’s silence commemorated the Israeli athletes killed by Palestinian gunmen as the stadium darkened and a soft blue light illuminated parts of the arena. Families of the victims had for years been urging Olympic organisers to honour them at an opening ceremony, but had their requests repeatedly rejected until now.

“Finally there is justice,” two of the victims’ widows said.

Once again the words of Thomas Bach, the President of the IOC, reverberated: “In this Olympic community we are all equal – we all respect the same rules.”

Meanwhile the youngest Olympian in Tokyo is Syrian table tennis player Hend Zaza, who was born in 2009. She qualified when she was just 11 years old, defeating 42-year-old Mariana Sahakian of Lebanon in the West Asia Olympic qualification tournament in Jordan last year. She has made it despite constant disruptions to her training schedule resulting from the Syrian civil war. Good luck to you Hend!

Amongst the entertainment for the evening was the release of the doves of peace as well as the spectacular pictograms worked by Japanese children. And in the sky above the cauldron was a turning globe of the earth made up from hundreds of flying drones.

And as a reminder of our own Cathy Freeman who lit the cauldron at the 2000 Sydney games, Naomi Osaka headed up the stairs and lit the stunning cauldron of Tokyo. 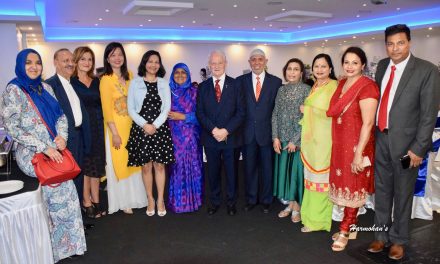