The 20 years of conflict since then has killed more than 170,000 Afghans including 47,000 civilians and 3500 US and allied military troops according to official estimates.

Actual number of Afghan civilians, Afghan military personnel and Taliban fighters killed is likely to be far higher. It is hard to count additional deaths due to disease, loss of access to food, water, infrastructure, and/or other indirect consequences of the war. 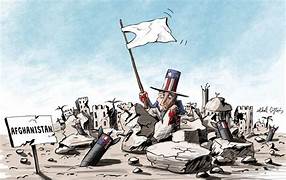 These 20 years saw political turmoil in the country as US failed to establish a government in Kabul who could govern the country in an effective manner. At the same time, US forces failed to defeat or weaken Taliban.

Tired with this failed mission and after spending more than 2 trillion dollars, Donald Trump negotiated an agreement with the Taliban to withdraw all US forces by a May 2021 before he left the White House.

Interestingly, not represented in that agreement were members of the Afghan government.

Joe Biden, after winning the Presidency, expedited the withdrawal of the US military, who departed from the Bagram airbase in Afghanistan on 2 July  in a remarkably unceremonious way. The Americans had been using the massive, heavily fortified facility, the size of a town for more than 20 years.

The news of American decision to withdraw its forces from the country, reenergised Taliban as they celebrated it as a victory. Within weeks, Taliban insurgents took control of more and more territory as US trained Afghanistan government forces failed to put any resistance.

Taliban also took control of the equipment, machinery and armaments left behind by US army in large bunkers across the nation.

As US decided to withdraw from Afghanistan, Chinese officials stepped up contacts with the Taliban leadership. China found a golden opportunity in positioning itself to play a defining role in the region.

Beijing, well aware that Taliban are an undeniable part of Afghanistan’s political future, became keen to build rapport with them. Taliban leadership, in consultation with Pakistan, viewed Beijing as crucial for its international legitimacy and a much-needed potential investor in the country.

Pakistan is cheering Taliban success as it may pave the way for strategic partnership between China, Pakistan and Afghanistan to boost security and economic cooperation between the three countries. Imran Khan, always seen by Taliban as a friend, may play a key role in developing this strategic alliance.

The Taliban leadership has learnt lessons from their hard-line orthodox stance in past and are likely to be more pragmatic in future. They claim that they have changed their views on women and female education.

They now say that Islam gives women rights in areas such as business and ownership, inheritance, education, work, the choice of a husband, security and well-being. Thus the Taliban leadership is seeking international approval by leaving the conservative and medieval tribal approach in understanding of religion, to the disappointment of ultra conservative groups among them.

The developments of past few months in Afghanistan are seen with huge concern in New Delhi. After a break between 1996 and 2001, when India joined the world in shunning the previous Taliban regime (only Pakistan, the UAE, and Saudi Arabia kept ties), New Delhi re-established ties with new US backed government in Kabul after the 9/11 attacks.

India saw an opportunity to return to the war torn country and benefit from reconstruction projects. India’s investment is now estimated to be worth well over $3 billion with multiple projects in pipeline. If Taliban government comes into power, all these projects are likely to be shelved.

Iran also faces a dilemma in dealing with Taliban due to ideological differences and threats that Hazara may face from hardliners, creating another refugee crisis. Iran is however keen to establish ties with Taliban led government to benfit from economic growth.

Disturbed by rapid advancement of Taliban, the US has launched several airstrikes against the Taliban in the last week of July. Taliban condemned the airstrikes calling it violation of the Doha deal which promised ceasing of military operations by US after May 2021.

How the situation in Afghanistan will evolve in coming months is hard to predict. Yet, it is more likely that China and Pakistan will play critical role in bringing stability to the country as Western powers may find themselves in a helpless situation after US withdrawal.

Bringing various Taliban factions together is a challenge and so is to bring to the negotiating table various ideological and ethnic factions and war lords.

China’s economic interest in having an alternative to the current Kazakhstan-Russia overland route as well as alternative route to Iran’s oil and gas fields for its Belt-Road Initiative is of high significance. It is extremely important for China to put in its best effort to establish a government in Kabul, favourable to its objectives.

It is worth reiterating that Afghans have once again proved that they cannot be conquered. Alexander, the Great, could not accomplish that task, nor could the British, the Soviets or the US. While Zahirudin Ghazi, the great Mughal warrior, captured Kabul in 1504 and carved out a kingdom before moving on India, he did so when no international laws applied. Afghanistan remains an unwinnable territory after the greatest superpower in the history has left the country without claiming victory.