On Saturday 6 June I heard Senator Kristina Keneally speak at the Emanuel Synagogue in Woollahra. She did not say much, or anything, about the rights of Palestinians, who are living under Israeli occupation. That is to be expected.

AMUST and my friend Dr Vacy Vlazna are admirable on this. We both know a lot about occupation of East Timor by the Indonesian military, because we both campaigned against it. It was a brutal occupation that Australia (and of course the US and Britain) supported. The Labor Party here was very much part of that support, until the eleventh hour.

Another bipartisan policy is torture of refugees arriving in Australia. The UN says that the indefinite locking up of people is torture, and that is what Australia does. I suspect this is, apart from racism, a form of money laundering, so that the money given to ‘security’ companies can travel back to the Coalition as donations.

And Labor, with no backbone, will not oppose it for fear of being accused of being ‘soft on refugees’ or some such thing. Even without the 1951 UN Refugee Convention (which Australia signed in 1954, under Menzies) this would be a total abomination.

Refugees are the most vulnerable, at the same time the bravest of people. They are not saints. My Dad was a refugee from Nazi occupied Austria, and he was not a saint. But he was very lucky to get help from outside, and he got out of Austria with his friend John Offenberger.

They got to New Zealand-Aotearoa in 1940. Many other Jews escaping persecution were turned back. The classic story is that of the SS St. Louis, a boat full of mostly Jewish Europeans, who left from Hamburg, Germany, in 1939.

Turned back from every port it went to in North and South America, it returned to Antwerp. Many of the passengers ended up in concentration camps and gas ovens. A book was written about it, and a film made in 1976, The Voyage of the Damned.  It was a bit like the Tampa in 2001.

The attack of conscience from that story resulted in the 1951 UN Refugee Convention. Australia signed it in 1954, as I have written. It gives refugees the chance to start a new life, with the rights to housing and work and, crucially, the right to get to a country any way they can, even ‘illegally’.

Why is this? This is because being a refugee is not like being on a pleasure cruise. You do what you have to do to get away from persecution.

That is the same John Howard who suspended the Racial Discrimination Act to reinvade the Northern Territory under bogus reasons and take away so many rights from Indigenous people there… the 2007 ‘Intervention’.

What we have to demand is that the ALP, the Australian Labor Party, bring back the Refugee Convention. That would mean the end of the black-shirted ‘Australian Border Force’, and its secret operations, that famously waved in the Ruby Princess which spread COVID-19.

It will mean the end of locking up refugees as if they have done something wrong. By letting the government get away with its propaganda on refugees (with the help of the Murdoch press and much of the rest of the mainstream media, including the ABC) there has been so much suffering, not only of actually locked up refugees, but those on misnamed ‘Temporary Protection Visas’.

This is just a start.

If we mean to stop the creep of fascism in Australia, we have to return the Refugee Convention to where it should be…. the heart of the Migration Act. We, as citizens have to get together and act on this.

I don’t think Muslims are doing much, when it is predominantly Muslims who are being targeted. Certainly Catholics are not taking a stand, even when Pope Francis says ‘Welcome the stranger’.

Mainstream Jewish organisation seem to have nothing to say about the violation of refugee rights, which is a bit surprising. Perhaps this is because of the truth about Palestinian refugees, so many created by the theft of their land, and the massacres in the founding of Israel.

We need to get honest about the place we want our kids to grow up in. Do we really want a police state where people can be locked up forever? Do we want a place where there is no fairness, and international law is regularly violated? Or do we stand up to be counted? 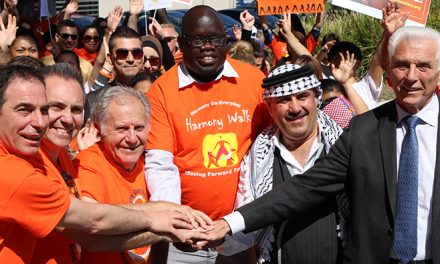