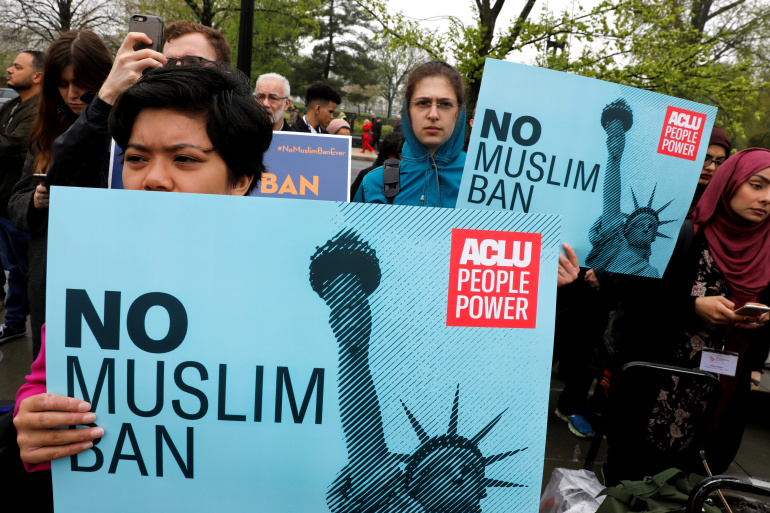 Welcomed by civil rights advocates as “a major step forward”, the US House of Representatives passed a bill on Wednesday 21 April 2021 that would limit the ability of any president to impose a travel ban on the basis of religion, in response to Trump’s “Muslim Ban”.

Informally known as the NO BAN Act, the new bill comes in response to former President Donald Trump’s controversial “Muslim ban” that barred travel entry to the US from several Muslim-majority countries.

The ban was initially applied to countries such as Syria, Iran, Yemen, Somalia, and Libya as well as from North Korea and Venezuela. However, in 2020 Trump expanded the prohibition to include Myanmar, Eritrea, Kyrgyzstan, Nigeria, Sudan and Tanzania.

According to US civil rights groups, the ban had immediate and far-reaching consequences for Muslim Americans and their families, refugees and others left stranded in these countries.

Counsel to Muslim Advocates, Madihha Ahussain explained that the NO BAN Act would revise US immigration law to prohibit discrimination based on religion. It would also curb executive power requiring the president to present evidence of a credible threat before issuing travel bans. Criticised as discriminatory and punitive, the ban divided families, denying people access to healthcare, and prevented friends and relatives from attending weddings, funerals and graduations.

On his first day in office, alongside a raft of other measures, President Joe Biden rescinded Trump’s travel ban by executive order on January 20.

The legislation was introduced by Representative Judy Chu and co-sponsored by at least 137 House members. According to Ms Chu, the ban was inspired by bigotry and was not created by any genuine national security concerns.

“America does not ban people because of their religion,” said Ms Chu. Illustration: President Joe Biden signing a total of 24 executive orders on his first day of office. Source: The Independent.

Despite Trump losing office in the 2020 presidential election and the reversal of the ban by President Biden, many US legislators including Democratic Representative Don Beyer, a sponsor of the bill see this as an important opportunity to take legislative action and safeguard the nation’s values.

“Donald Trump’s Muslim ban is a dark stain on our country’s history, and it must never happen again,” said Mr Beyer.

It is unclear what prospects the Democratic-backed House bill will have in the US Senate, where Democrats hold only a slim majority.

Nevertheless, it is also hoped that this bill, alongside another related measure that would require that certain immigrants be allowed access to a lawyer when they are detained at US ports of entry both passes through Congress. Such legislation would help to create a more fair, humane and viable US immigration system.

“It is very important to make clear to the American people and to the world that this betrayal of our national values, which hurt so many people, is not what we stand for and will not be repeated,” Beyer.