Youth PoWR (Parliament of the World’s Religions), a coalition of young adults from different religions, launched their interfaith charter, The Sydney Statement: Building Bridges Between Believers from Different Religions, on Thursday 11 March 2021 at Sydney Town Hall.

The audience at the event included members of the media and a religiously and culturally diverse representatives of civic, religious, community and educational leaders, students, interfaith advocates, colleagues, friends, and family.

After more than two years generating, writing, consulting and authorising the content of The Sydney Statement, Youth PoWR presented a world-class resource of values, principles and commitments for fostering greater interfaith dialogue and friendship. The launch programme was started of by MC Ryan Epondulan, the project’s youth coordinator  with a Welcome to Country by Theresa Ardler and the Doonooch Dancers followed by an introduction by Rev Dr Patrick McInerney, Project Executive of The Sydney Statement, and Director of the Columban Centre for Christian-Muslim Relations.

A highly moving keynote address was delivered by Alpha Cheng reflecting on the murder of his father Curtis, who, when leaving work at Parramatta Police Station, was shot and killed by a 15-year-old boy claiming to act for Islamic State.

Alpha’s compassionate plea was to not take the easy way out and lay blame at the feet of an entire group of people. He would not have politicians use his father’s death to attack Muslim community.

“The members of Youth PoWR identified values and principles for a peaceful, just and harmonious multicultural, multi-religious society, and provided concrete steps for getting there,” Ryan Epondulan, said of the Statement.

“The Sydney Statement has been described as ‘inspiring’, ‘comprehensive’, ‘timely’ and ‘courageous’,” Mr Epondulan continued. “It forms people for growing interfaith relations which are authentic, honest and respectful. It also educates them about the different ways of carrying out this task.” During his speech, Rev Dr Patrick McInerney acknowledged Australia as one of the most successful multicultural societies in the world but reminded the audience that to maintain this success we must do better.

He cited the Christchurch massacre “by one of our own”, antisemitism, the rise of hate speech, Islamophobic attacks suffered daily by Muslims, and the shadow of racism cast by White Australia as motivations for pursuing the actions presented in The Sydney Statement. Rev Dr McInerney also revealed that in the initial responses to the Statement, some people thought it was too religious, while others said it was not religious enough; that it was too secular, or not secular and all-inclusive enough; that on some social issues it goes too far, or not far enough.

To which Rev Dr McInerney exclaimed: “To the young people who authorised The Sydney Statement, I say, if everybody is against it, you must have got it just right!”

“The Sydney Statement never intended to be motherhood platitudes,” Rev Dr McInerney continued. “It is not a pacifier, or a palliative. Its purpose is not to affirm the status quo, but to disrupt it. It is a call to action.”

“The Sydney Statement serves as a preventative and an antidote to threats to Australia’s peaceful and harmonious existence. Some may not agree with parts of the document, for it is made up of many different voices,” Rev Dr McInerney said, “But it is in respecting differences that we can begin to speak with one another and “form a symphony”. The Sydney Statement is a catalyst for conversation and action that bridges difference and division.” Now you can be part of it. Youth PoWR invite the wider public – peers, religious leaders, co-religionists, believers from all religions and all people of good will ­– to commit to living out the values, principles and commitments of The Sydney Statement by signing up to it on its dedicated website: www.thesydneystatement.org.au.

Please lend your commitment to act.

The website is also packed with interfaith resources, such as posters, a booklet, the story of The Sydney Statement; the interfaith statements from other cities that inspired it; information, websites and articles on interreligious dialogue; and more.

These resources are of use to schools, councils, community organisations, multicultural and multi-religious groups, and more.

As Rev Dr McInerney concluded in his speech, “It is a pedagogy, a programme, a roadmap for Building Bridges Between Believers from Different Religions.”

The Sydney Statement is an initiative of the Columban Centre for Christian-Muslim Relations, in partnership with Western Sydney University. It was supported by the NSW Government with a COMPACT Grant through Multicultural NSW and underwritten by St Columban’s Mission Society. 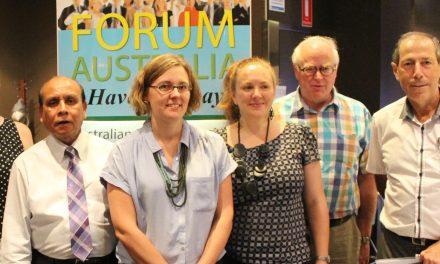