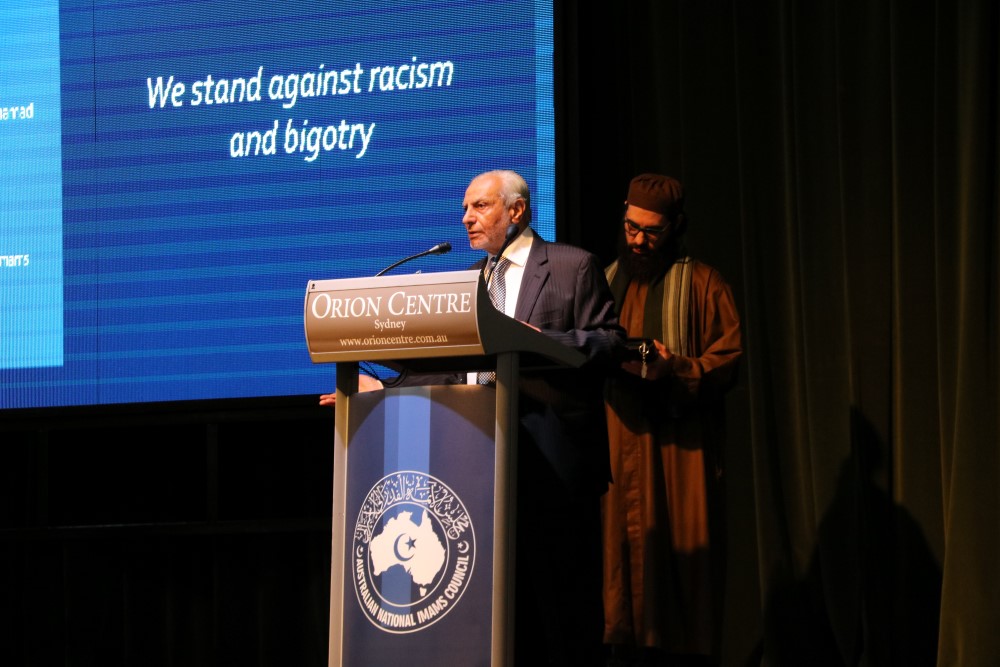 The Australian National Imams Council (ANIC) commemorated the tragedy of the Christchurch massacre on Monday 15 March 2021 at Orion Centre, Campsie in order to remember and honour the victims and their families and offer messages of peace for all, in the presence of a large gathering of parliamentarians, diplomats, government agencies and religious and community leaders. The ANIC speakers at the event called for government action against Islamophobia and hate speech, which it was said “contributes to an enabling environment for the terrorist event which occurred in Christchurch”.

They called the Federal and State governments to take more action, including having protective laws against vilification and prohibiting discrimination on the ground of a person’s religion or religious belief.

They also highlighted the deficiencies of the existing legal frameworks. Australian Prime Minister Scott Morrison sent his apologies for not being present, but sent a message saying, “today we remember the appalling act of terrorism in Christchurch that took place on this day two years ago. We remember and honour the victims, send our love to the survivors, and stand with the families and loved ones who are rebuilding their lives.”

The formal program started with a welcome by the MC, Bilal Rauf, ANIC Senior Adviser, starting with Acknowledgement to Country followed by emphasising the significance of the day and acknowledging the presence of guests from diverse faiths, background and walks of life. He further added, “We gather, and remember, and hope that the sadness, pain and horror of what occurred can motivate us to be better and stronger in the steps we take to stamp out hate and violence against anyone, including based on their religious identity.” After the recitation of Quran by Anas Yaghmour, ANIC President Imam Shady Alsuleiman after welcoming the guests recalled the events of Friday 15 March 2019 when he was preparing to go to the mosque for leading the Juma prayers.

“The perpetrator of this horrific crime was radicalised by far right and white supremacist ideology that existed and continues to exists that is a great threat to our diverse community and peace and must by countered by our political leaders and religious leaders and our law enforcement agencies,” Imam Shady said. The Mufti of Australia, Dr Ibrahim Abu Mohammad during his address said that although the act of terrorism in Christchurch was committed by an extremist Australian, not all Australians hold an extremist view.

“Islamophobia is not a new phenomenon, there are published works promoting Islamophobia and a  number of people in influential positions have used Islamophobia to gain power and remain in power in many countries,” Dr Ibrahim said.

“If we agree that there are extremists in both East and West, we find that those who are operating in the East are doing so against the law and are contained and we find them in jails or in hideouts, but the greater problem is that the extremists in the West exist amongst those who legislate and are in influential positions and able to propagate their extremist views widely to radicalise others,” Dr Ibrahim emphasised.

The main victims of Islamophobia have been Muslim women, identified by their Hijab who have faced abuse and live in fear in their day to day lives. Two of these women bravely shared their stories at the occasion with the audience. Rana Elasmar, 33 became became a victim of a vicious and unprovoked, physical attack on the night of  20 November 2019, pregnant at the time while sitting in a cafe with friends Parramatta.

“I have had no affiliation or previous contact with the perpetrator. This was an attack, purely based on my Islamic faith, made evident through my veil, and also because, I am a woman,” Rana said.
She recalled, “in the moments after the attack I was shocked and disappointed at the comments that followed. Patrons of the café who had witnessed the attack said things like ‘I thought he was your husband’ or ‘I though you knew him’. This is a mindset that needs to shift. No matter who the person is, we are equal as human beings and nobody deserves to be abused in that way. This change starts here and now.” Ramia Sultan, solicitor and ANIC adviser shared her reflections after the Christchurch tragedy and her concern for Muslims,, men, women and children who visit mosques for their prayers.

“The events that took place on Friday 15 March 2019 have made me reflect a lot, on things I either never saw or perhaps chose not to see. I realised that Christchurch was never an “unforeseen circumstance”, Ramia said.

She further explained, “There was always a lead up to it. How is it OK to sit in parliament and call Islam a “disease”, or refer to a “final solution” when talking about Muslim presence in society? How is it OK to turn up to parliament wearing and ridiculing religious attire or claim that it was a “mistake” to let a cohort of Muslim immigrants come to Australia in the 1970s? It is comments and statements such as these that contribute to severe hatred.” “Hence, it becomes our duty as bystanders, policymakers and law changers to question and assess what protective legislative measures are in place to better protect minority communities – including Australian Muslims – from Islamophobia.”

“Better measures, which will hold perpetrators to account, need to be implemented in order to monitor both online and offline hatred and violent extremism to ensure that another Christchurch never happens again,” Ramia concluded. Dr Geof Lee MP, Minister of Sport, Multiculturalism, Seniors and Veterans addressed the audience starting with the Islamic greeting of Assalamu Alaikum and while acknowledging the presence of civic and religious leaders expressed his sympathies on behalf of the NSW government at the occasion. Ms Jodi Mckay MP, NSW Leader of the Opposition and Shadow Minister for Multiculturalism conveyed her appreciation to Rana for bravely sharing her story and assured her of her support as a Hijabi Muslim women. She said that since the perpetrator was an Australian, Australia has a responsibility to ensure that this kind of atrocity never happens again. There was a reading of the names of the 51 victims of the Christchurch attack by Imam Ibrahim Dadoun and Mariam Ardati together with the photos of the victims displayed on the screen as the names were called, to honour and remember them. Imam Ahmed Abdo, President of the Council of Imams, NSW.

The program concluded with a moving Dua, supplication for the victims, the well being of all in Australia by Imam Ahmed Abdo, President of the Council of Imams, NSW:

O Allah, You are the Giver of life and the Bestower of death. We send prayers and salutations upon our Beloved Messenger Muhammad.

Indeed, to You we belong, and to You shall be our return.

Each of the 51 Muslims who were martyred in Christchurch 2 years ago – we ask You to raise their ranks and cast upon them an eternal radiant light that shines from their resting place on earth to the highest Garden in Paradise.

O Allah. The persecution and agony they experienced on that Friday – where they visited your House to seek nearness to You through their devotional prayers – we ask You to replace their pain with an everlasting vision of Your Countenance in the Garden of Paradise.

O Allah. They were followers of the pure and peaceful path of the Last Messenger, Prophet Muhammad, peace be upon him, going to drink from his practice on the blessed day of Friday.

We beseech You, Lord of the Heavens and Earth, to grant them a drink from the blessed hand of your Messenger, at the basin of the hawd – a drink which they will never become thirsty afterwards.

You saved Ibrahim from the flames of the fire.

You saved Yunus from the belly of the whale.

You saved Yusuf from the darkness of the well.

You saved Noah from the overflowing waters of the earth.

You saved Musa from the tyranny of Pharaoh.