Selective quoting and perception engineering: An “Islamic” approach in Turkey? 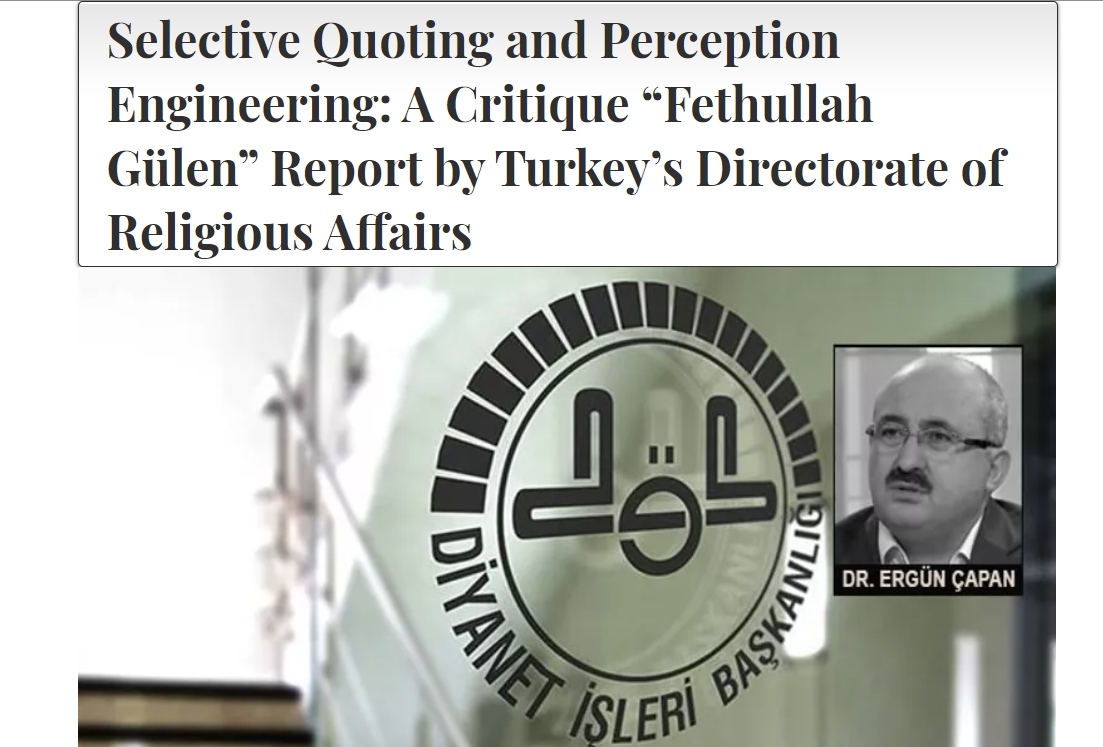 The evolution of the Ottoman Empire into a Turkish secular state brought with it authoritative and oppressive political reform, which ultimately changed the way Islam was able to be practiced in the public sphere and the influence it had over the nation.

The radical secular regime also lead to the birth of Diyanet (Turkey’s Directorate of Religious Affairs) in 1924 – the official state institution established to execute the works concerning the beliefs, worship, and ethics of Islam and control of the sacred places of worship.

In the recent decade, Diyanet has been utilised by the Erdogan regime to stifle critics through religious rhetoric. It has been a particularly effective tool in furthering Turkey’s post coup crackdown on the Gulen movement, by releasing reports prepared mainly by the former President of Diyanet, Dr Mehmet Gormez, and sermons, in which scholar Fethullah Gulen and his followers were accused of heresy and treason.

In late 2020, Dr Mehmet Gormez spoke about excommunication and accusations of heresy in Islam whilst referring to controversial religious statements made by Dr Mustafa Ozturk.

Dr Gormez stated that while he did not agree with Dr Ozturk’s comment that the Quran cannot be the word of Allah, Ahl-al Sunnah needed to evaluate Dr Ozturk under the sphere of Ahl al-Qibla.

He proclaimed that it was not acceptable to skilfully and selectively quote people to take their words out of context, and thus the excommunication of Dr Ozturk was wrong.

The article aimed to evaluate the extent to which Diyanet’s team, headed by Dr Gormez, adhered to the aforementioned principle of Ahl al-Sunnah in their report on Fethullah Gülen.

In the article, Dr Capan attempts to examine whether the report titled ‘FETO In His Own Words: Organised Abuse of Religion’, in which Dr Gormez wrote the preamble, measured up to his commendable ‘methodological and moral standards’.

“A believer enters into the atmosphere of the reverence and affection of the One that is meant to be revered and excited from the moment they enter a mosque. That gathering is such that on the pulpit is Allah who looks, sees, hears and intimately knows all about us. And if there is one person who walks between your rows and among you and provided he is given permission from above, who is present in all gatherings about him to bestow blessings onto the gathering, it is Muhammad Mustafa (pbuh)… the presence Muhammad Mustafa (pbuh) who looks in His eyes and observes His beauty.”

Dr Capan stated that Diyanet’s report concluded that Gulen’s claim reduced Allah’s existence to a specific location, and that he was wrongly influencing and risking the faith of the masses as Allah is beyond the physical realm.

The report also found that Gülen likened Allah to humans by attributing Him physical attributes such as eyes, claiming his Islamic knowledge was deficient and that he abused sacred values.

By way of example, Dr Capan thoroughly measured the report’s above finding against the criteria of the Ahl al-Sunnah, to unearth the “Diyanet’s attempt to engineer perception by selectively quoting Gulen”.

In doing, so Capan stated the following criticism:

In Diyanet’s own publications, the importance of metaphorical expression has been emphasised. In Diyanet’s Encyclopedia of Islam’s entry on anthropomorphism, is it emphasised that it is deviation and disbelief to interpret [metaphorical] expressions in the Quran and Hadith literally without recognising the relationship between the metaphors and the truth they refer to,” he continued.

With regards to anthropomorphism, Capan proclaimed that Gulen’s position is the same as the Ahl al-Sunnah ulamah, as he believes that attributing body parts to Allah, such as hand, feet and eyes, is heresy, and has made it numerously clear that Allah is free from space and time.

Lastly, Capan refers to a multitude of renowned Muslim scholars who have expressed their support for Fethullah Gulen’s ideas and affirmed that his approach to belief and Islamic service are in line with Ahl al-Sunnah.

Dr Capan concludes the article by stating that “the Diyanet report on Gulen, which was ordered to be prepared by Prof Gormez himself was based on a misguided method, represented a double standard and was compiled through multiple examples of selective quoting”.