Global injustice is being perpetrated  by the rich and powerful in global affairs because of self interest, double standards and hypocrisy.

While all and sundry are convinced including Turkish and US intelligence that Saudi Crown Prince Mohammed bin Salman (MBS) personally approved the killing of Saudi journalist Jamal Khashoggi, the Biden administration announced on Monday 1 March that they will not sanction MBS because of US self interest. Justice denied.

The Myanmar military has been committing atrocities against the Rohingya for decades leading up to the recent pogroms of killing and burning resulting in over one million Rohingya living in refugee camps in Bangladesh unless terrible conditions.

And now the military has dismissed the elected government and are now killing their own people who are protesting against the coup. Even Australia is not raising any alarm on a government level because of self interest of military ties with the junta. Might is right.

Pakistan and many Muslim countries do not have the guts to challenge China over their treatment of  Uyghur Muslims because of their self interest in jeopardising Chinese investment. Rich and the powerful prevail.

While there is so much talk about denying Iran to build a nuclear bomb, no one is questioning the stockpiling of nuclear weapons by Israel for decades. Double standards.

Kashmiris have been under brutal military lockdown for more than 18 months in addition to suffering from COVID-19 pandemic but no sanctions against Modi government either from US or Australia due to self interest.

US and Europe keep entertaining the Egyptian dictator, al Sisi wrecking havoc on the civilian population with jailing, torture and oppression on a massive scale. Double standards.

The Iranian government maintains its support of the murderous Baathist dictator in Syria against all its idealogical principles. Self interest.

Hence it seems that the international order is not run on principles, justice and fair go, but self interest, double standards and hypocrisy.

No wonder we are living in a chaotic world, hence no justice, no peace. 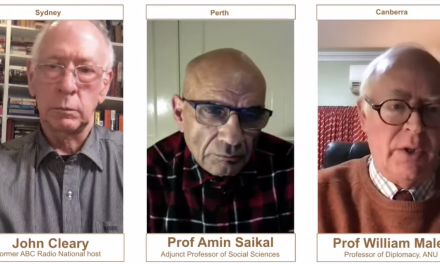