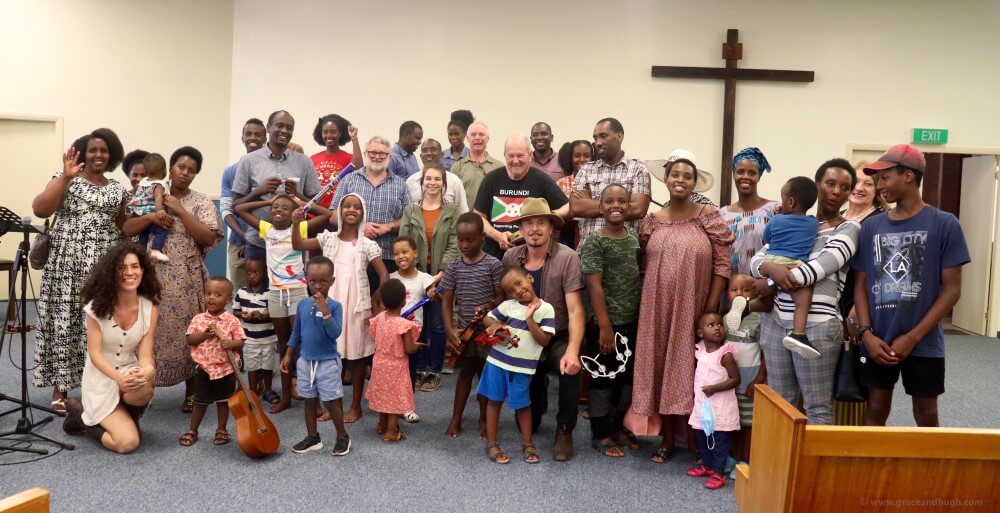 Towards the end of December 2020, Philip Feinstein, manager of Music for Refugees, accompanied by Hugh Murray and Grace Hickey delivered a plethora of musical instruments, laden into two vehicles, to refugees from the African Congo, Sri Lanka and Cambodia, during a trip to Bathurst, Orange, Cowra and Lithgow.

This Central West region of NSW, just west of the Blue Mountains, is an area now home to many refugees from many countries. This is an area of over 63,000 square kilometres with a population of just over 200,000. However many refugees are now making this their home.

“We brought guitars, ukuleles, violins, trumpets, recorders, trombones, keyboards and various percussion instruments for these people” said Philip. “It was quite amazing to see how quickly these refugees picked up on playing so quickly.” “It was terrific to help make some connections in the Central West , and then wonderful to hear the harmonies of the Congolese community singing and to see the joy of people playing and trying out new instruments……,” Anni Gallagher, Migrant Support Officer for Orange City Council said. The Grace and Hugh, the amazing music duo destined for international stardom, entertained a huge crowd (see www.graceandhugh.com) before the Congolese reciprocated and sung a variety of African songs for us. They even had a piano player by the name of Amos Ibyikunze who is destined for musical heights with his own style of African music.

Being a musician from South Africa, Philip played and sung a couple of South African songs including the big Miriam Makebe hit “The Click Song – Qongqothwane”   https://www.youtube.com/watch?v=vhgb60Qsjrs

Another surprise for the traveling musicians was meeting Meta and Vichetra, a brother and sister from Cambodia. Whilst the sister took to the trombone with ease, her younger brother was able to muster a few notes on the trumpet with virtually no tuition at all. On his return journey Philip stopped at the Lithgow Neighbourhood Centre and left a trumpet, guitar, violin and ukulele for their local refugees.

We are looking forward to a returned visit to country NSW next year to see how all the refugee musicians are going.

Meanwhile Music for Refugees still has a few instruments in stock to give away to any refugees who want them  –  there is no cost. Just send an email to Philip on [email protected]