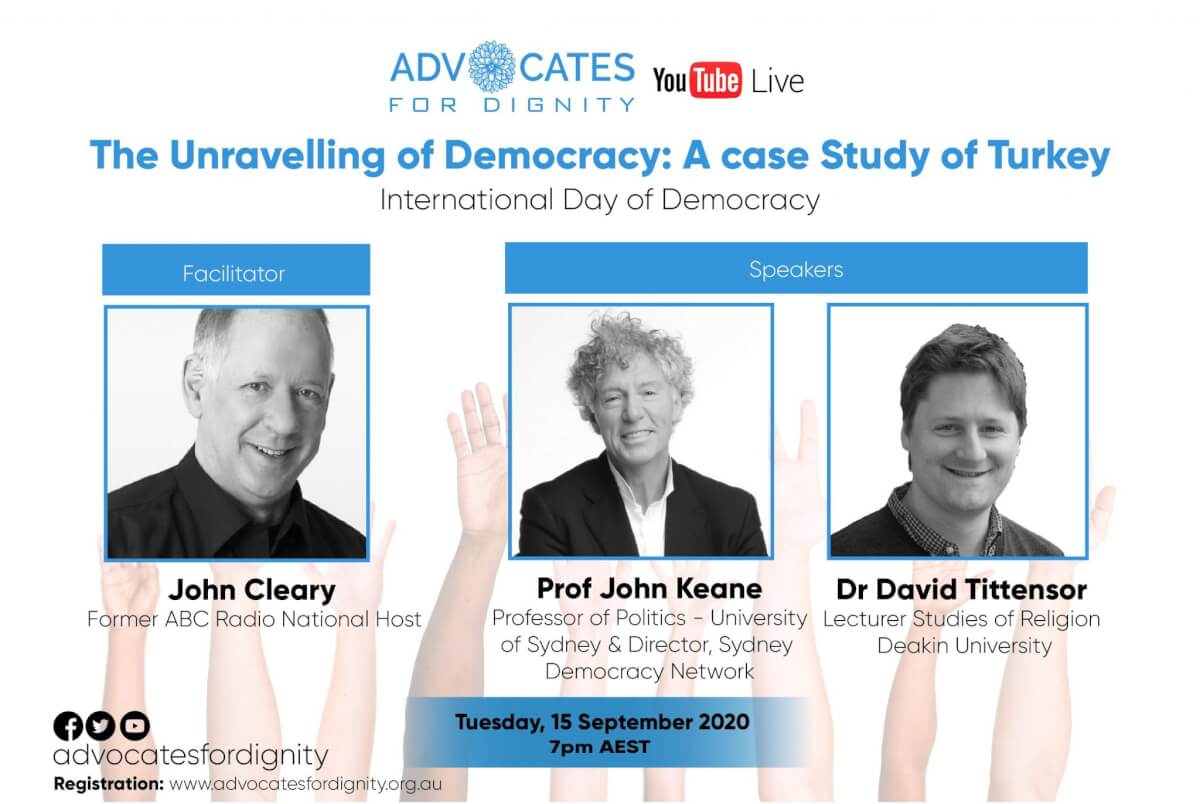 Tuesday, 15 September, marked International Democracy Day – a day the United Nations refers to as an opportunity to review the state of democracy around the world. It is vital that the indispensable elements of a democracy, which are inherently connected to the promotion and prevalence of human rights, are upheld in times of crisis such as the COVID-19 global pandemic to ensure that states are providing legal, proportionate, necessary and non-discriminatory responses.

In honour of this important day, and at a time when democracy is more important than ever, Advocates For Dignity hosted the third of its webinar series; “The Unravelling of Democracy: A case study of Turkey”. The webinar was hosted by Australia’s veteran ABC broadcaster, John Cleary, and featured Professor of Politics at Sydney University and director of Sydney Democracy Network, Professor John Keane, and lecturer of Studies of Religion at Deakin University, Dr David Tittensor.

Opened by the Director of Advocates for Dignity, Mehmet Saral, the webinar explored the idea of elective despotism; the way in which modern day regimes such as that in Russia, Turkey, Hungary and Kazakhstan have metamorphosed democracies into despotisms within a short period of time and with the support of its people.

Professor John Keane, whose book ‘The New Despotism’ was recently published by Harvard University Press, stipulates that the stepping stone of this metamorphosis is a calculating, tightly organised, well disciplined political party that behaves as though it has a hotline to the people. The party begins it’s victory through elections, which convinces its leaders that a compliant follower-base is strategically valuable.

Electoral victory tempts the party to kidnap institutions; capturing the legislature, the judiciary, public and civil institutions and expertise, and using these institutions to weaken their political opponents.

“All of this is led by a big-boss leader who begins to look more like a demagogue; has a carefully crafted media strategy, is skilled in talk of the people and democracy, warns against the enemy and the possible collapse of law and order, with the backing of the police and army which are usually kidnapped in the process,” Professor Keane said.

“As the chinese proverb goes, there should be the killing of chickens to scare the monkeys”.

And so there are arrests, detention without trial, unsolved murders and poisonings.

Sensational media accounts in which the opposition is implicated, opposition party scandals,

talks of a possible coups,” he continued.

At this stage, demagogic talk of democracy and the need for firmer rules backed by the people grows louder and more militant. Elections become great tools in liquidating democracies into elective despotisms, as they are used to define a new people and to marginalise others that don’t belong. Despotic leaders pebble fears and doubts to eventually create a pasteurised group of people who are said to be ‘sovereign’ and supportive of the government.

In the case of Turkey specifically, Dr David Tittensor attributes the shift towards despotism to a multitude of factors, the first being ‘EU accession fatigue’. He states that when the AKP government initially came into power, the prospect of becoming an EU member motivated the party’s moderate and forward thinking campaign. However, this enthusiasm began to decline in 2006 as European figures curtailed Turkey’s accession, implying that it was fundamentally and culturally different to the majority of the European block.

The second factor Dr Tittensor cited was the constitutional court case brought against the AKP government in 2008, taken up by secularist forces claiming that the party was undermining the secular nature of the state. The indictment failed by a 6-5 verdict but resulted in a unanimous decision to cut the party’s funding by 50%.

This attack on AKP led to a fundamental depolarisation of Turkish society on a secular-religious divide. It brought back memories of previous persecution at the hands of secularist forces, coups and religious parties being cut out of the political sphere,” he said.

“The AKP then instigated a couple of court cases against the secularist forces to weaken military tutelage, such as Ergenekon filed in 2008. Erdogan saw these trials overturned in 2015 to 2016 but claimed he was deceived by the ‘parallel state’, or the Gulen movement in both cases,” he added.

“A corruption probe against the AKP in 2013, which saw 4-5 ministers resign on allegations of embezzlement and bribery, also began a battle between the AKP government and Gulen movement. Thousands of affiliates were dismissed from their ranks and jobs as a significant dismantling of the movement began.”

The 2016 attempted coup, which saw president Erdogan placing the blame on the Gulen movement and rebranding them a terrorist organisation, accelerated the crackdown and became a catalyst in weakening all forms of opposition.

Both guest speakers summed up the decline of Turkey’s democracy in agreement that without the anchor of EU accession, which pushed the state towards democracy, it began to drift back to its authoritarian tendencies. 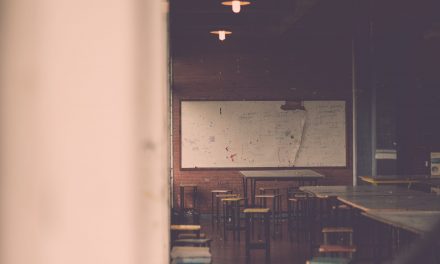