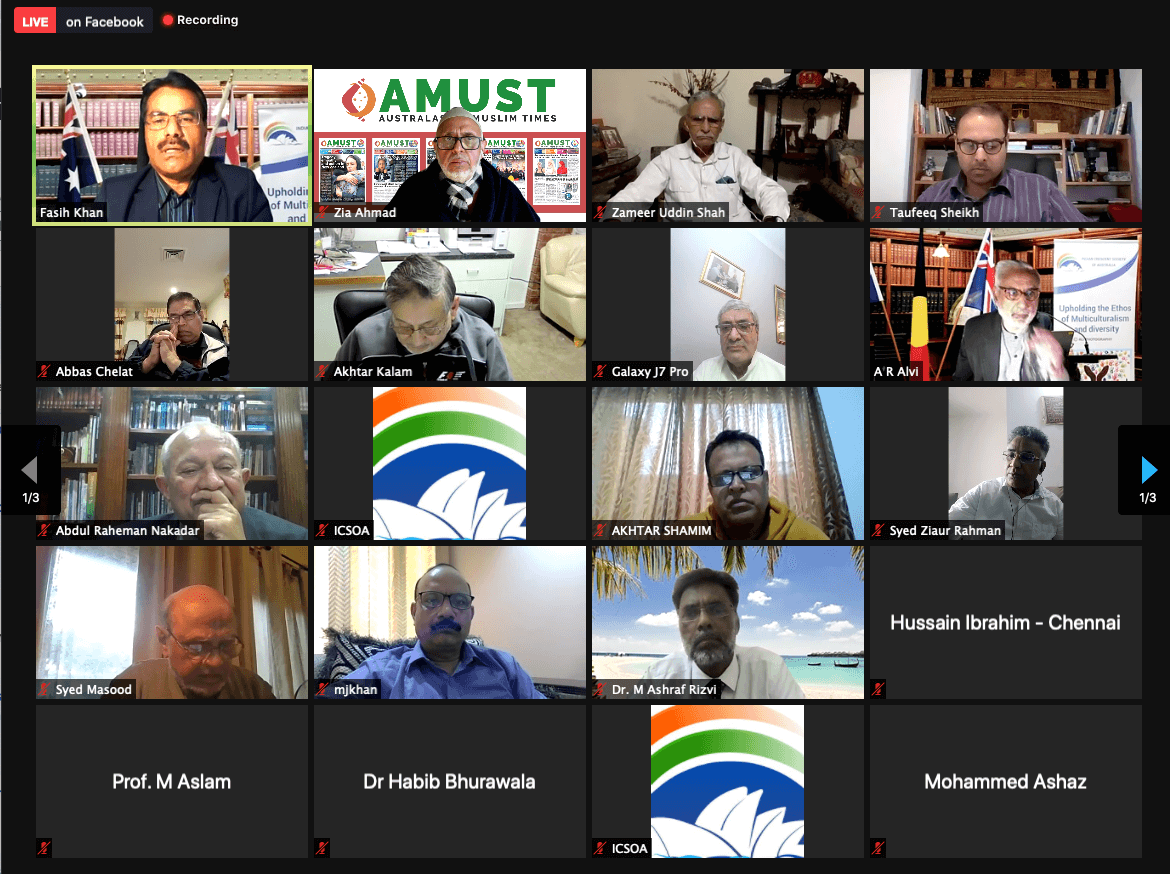 The Indian Crescent Society of Australia (ICSOA) based in Sydney organised a webinar on Sunday 25 October showcasing top notch educationists to address a world-wide audience from the Indian diaspora including many from within Australia. Each speaker in turn presented their ideas on the state of Muslim education in India, hurdles, shortcomings and possible solutions.

The program concluded with vote of thanks by Mr Chelat Abbas ICSOA treasurer.

The full proceedings of the webinar, around 2 hours  can be viewed at the following Facebook link:

Detailed report on the Webinar by Fasihuddin Khan:

The vision once coined by Sir Syed Ahmed Khan of empowering Muslims of India with the right balance of mainstream and Islamic education, has never made more sense than now when Muslims in India have finally realised themselves to be politically irrelevant and socially orphaned.

The web conference organised on Wednesday 25 October 2020 by ICSOA was a two pronged approach to tackle this grim situation. Firstly to act as a wakeup call for those who are still living in denial of this harsh reality & secondly to bring to fore the efforts of fellow Muslims who realise the dire situation Muslims of India have fallen into. They have made it a mission of their lives to turn this situation around. ICSOA hopes similar continued efforts such as this webinar will help consolidated these isolated efforts, eventually to create a significant dent in this intellectual drain that the Indian Muslims are facing.

The conference was moderated by MC Mr Fasihuddin Khan Secretary of ICSOA he set the tone and agenda right at the beginning of the evening with his pointed remarks that highlighted the appalling conditions of education and the dismal affairs of the society at large which has led to the need of such events this was followed by a short multimedia presentation created by Mr Zaheer Abbas highlighting the vision and achievements of ICSOA.

In his opening address the President of ICSOA, Mr Abbas Raza Alvi welcomed and addressed the guest speakers also urging the desperate need for forming a global think tank for Muslim relevant issues in general and specifically the Indian Subcontinent. He appealed to lawmakers to focus their allocation of resources towards constructive measures such as education, inclusion, peace & harmony building initiatives, instead of focussing a major part of national budget into defence and arms acquisition.

Dr Ashraf Rizvi who has made commendable efforts in the space of making online education accessible to the Muslim youth, emphasised not only on youth and adult education but also the need for training the educators while calling for a synergy of likeminded enterprises to come forth on a platform and create entrepreneurship opportunities and vocational training facilities for Muslims.

Dr MJ Khan in his address urged the participants and speakers alike to tap into the opportunities that are made available by the government and change the focus of the Muslims in India from traditionally acquiring trade skill towards the service sector. With the rise of automation and robotics he envisions Muslims will find better prospects by letting go of their traditional approach to education & employment opportunities.

General Shah taking the well expected line of being a straight shooter he is known to be, did not mince his words while making some sharp observations remarking synergies are essential but is a  tall order and needs to be cultivated with strong foundations. He presented a slightly tweaked modern vision of Sir Syed Ahmed Khan replacing the book with computer in one hand while the Quran in other for the Muslims. Gen Shah emphasised on strengthening the effort in school education for the Indian Muslims, while discouraging early marriages he lead with the understanding of the two fold issue being not just the lack of education but also the abject poverty Indian Muslims suffer from.

Dr M Aslam masterfully delivered an all heart viewpoint with a detailed and effective presentation which helped him share a plethora of statistics and information to whoever was willing to absorb the abundance of problem and respective solution statements he had to offer. He emphasised to those in capacity, to identify the opportunities in the National Education Plan 2020 of India & use them to the advantages of Indian Muslim. He was on point when he called for an agreement to disagree to be put in place while synergising the efforts of various organisations coming together for a cause.

Dr Nakadar in his address lastly, reminded all to ensure one not just celebrates the legacy, but also the message left by Late Sir Syed Ahmed Khan. He emphasised on the efforts that AIMEB does to recognise the achievers and his call for creating a national collective focussed on consolidated efforts towards improved education. He reiterated the unarguable fact that educational empowerment is indeed the mother of all Empowerment.

The vote of thanks was imparted by  treasurer of ICSOA Mr Abbas Chellat who also raised an important reminder to all participants an speakers alike to take the lead from how the Muslims of Kerala within their limited resources turned the tables around for the better and brought not only the Muslims of Kerala but the entire state out of intellectual poverty and made Kerala the leading states in India in terms of Literacy.

The conference was meticulously arranged, managed, and supported by Mr Jafar Syed along with Mr Taufique Sheikh to ensure all technical functionalities were executed seamlessly as coordinating with speakers globally LIVE and that too in multiple time zones potentially is a massive technical challenge.