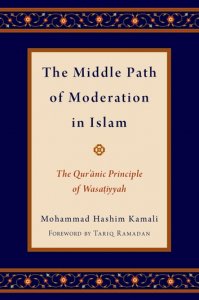 The Almighty blessed Islam with abundant principled guidance to steer us towards Ultimate Success. ‘Wasatiyyah’ is an essential aspect of the self-identity and world-view of Muslims.

Allah placed the key verse on Wasatiyyah exactly half-way through the second Qur’anic chapter: Thus, we made of you a community justly-balanced that you may be witnesses over the people, and the Messenger [Muhammad] a witness over yourselves. (Qur’an 2:143)

Muhammad Hashim Kamali, CEO of IAIS Malaysia, was awarded “Best Book in the World” by Iranian President Hassan  Rouhani for “The Middle Path of Moderation in Islam: The Qur’anic Principle of Wasatiyyah.”

‘Wasat’ means to “hold the middle between two extremes.”

Opposite is ‘tatarruf’, denoting inclination towards peripheries, which is extremism and excess.

Al-Qur’an designated the Ummah as the ‘Midmost community.’

Al-Zuhayli highlighted Wasatiyyah means moderation and balance in belief and character, and in the socio-political order.

Opposite is extremism, ie who exceeds Islamic laws or limits of moderation.

With Tawhid (Oneness of God), Wasatiyyah binds various dimensions to focus Islam on its centre.

Justice (‘adl) is the closest synonym of Wasatiyyah, which underpins the Qur’anic designation of the Ummah as ‘witnesses.’

Reference to testimony in Qur’anic verse2:143 implies commitment by Muslims as witnesses to justice.

Another element featured with Wasatiyyah is Mizan (balance): “The Heaven He has raised high, and He has set-up the balance that you may not transgress (due) balance.” (Qur’an 55:7-9)

‘Mizan’ denotes balance between individuals and the collective (essential for successful pandemic suppression); between the physical and spiritual; between men and women.” (Allawi, NUS, Singapore)

Extremism violates limits of moderation identified by reference to the Qur’an, hadiths and customs. The aftermath of the 9/11 attacks and US-UK militarism emboldened Muslim extremists. The ‘War on Terror’ propelled a radical minority to the centre of attention.

As emphasized to former PM Malcolm Turnbull (AMUST 2017), it is an oxymoron to speak of  ‘Islamic extremism’ since by definition it cannot exist. Islam is moderate and terrorist group ISIS were non-Islamic.

He said, “Observe (devotional) acts to the extent of your ability. By (Allah) no fatigue overtakes Allah until you are overtaken by it yourselves.” (Bukhari)

Allah recommends a middle course between this world and the Hereafter: “Seek by means of the wealth God gave you the Abode of the Hereafter, but forget not your share in this world.” (Qur’an 28:77)

Islam is mistakenly portrayed as a threat to peace, while most Muslims condemn extremism.

Terrorists who commit cowardly murder behind a mask of Islam and imagine they are waging jihad are in the eyes of true Islam, murderers.

Tabdhir though is spending on what is unlawful. For al-Isfahani (d.1124 CE), Israf is comprehensive: e.g. when an individual exceeds natural limits.

Individuals should aspire to Wasatiyyah in all matters, e.g.: Those who when they spend, are not extravagant nor niggardly, but hold a just (balance) between (extremes). (Qur’an 25:67)

God forbids excesses: “But waste not by excess: for God loves not the wasters (Quran 6:141) and “O Children of Adam! Wear your beautiful apparel at every time of prayer: eat and drink: but waste not.” (Qur’an 7:31)

As the Muslim community is the midmost community committed to justice and peace, we should stand on Wasatiyyah, correct imbalances, and do what we can to restore equilibrium … within ourselves, and humanity at large.