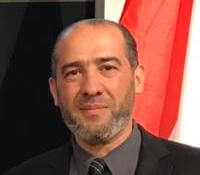 AFIC, became a household name for all the wrong reasons, a byword for scandal. “Like a script from a mafia movie” blared one headline.

Now, facing election, the President who claims credit for getting the organisation out of the news, speaks publicly for the first time during an exclusive interview completed on Friday 24 July 2020.

AFIC President Dr Rateb Jneid was elected in 2017 after an extremely messy internal dispute which included one group raiding and occupying the Sydney offices and appeals to the NSW Supreme Court, which ruled the raid illegal.

In a three-way contest.  Outside runner Jneid faced two opponents:

The incumbent president Keysar Trad, a figure of controversy in Australia since he successfully sued and gained a public apology from high profile conservative commentator Alan Jones after the shock jock called Lebanese Muslims “mongrels” and “vermin”.

Also in the running was Professor Shahjahan Khan, an academic from Toowoomba, who saw off two arson attacks on the city’s only mosque.

Back in AFIC, Trad declared:  I’m donating my time and energy to unite the community and help make this a clean election.  For once in his long career, Trad is avoiding the media spotlight.

Regarding the highly competitive Halal certification side of AFIC, Jneid said:

“If it bears the AFIC stamp, then it has gone through the highest standard of testing, you can trust AFIC Halal to be 100% Halal.  Our Halal section includes a Sharia committee that combines the skills and experience of several Imams.”

Despite issues impacting his family’s reputation in the broader community Jneid fought for his beloved WA Islamic Council. Within a few months he had successfully lobbied Muslim leaders around Australia and was elected AFIC president.

And then something amazing happened: AFIC disappeared from the headlines. Arguably his greatest success.

Jneid has not given press interviews since taking the Presidency. But now he is keen to face his critics, ticking off his achievements.

Dr Jneid says all disputes with Malek Fahad school have been settled and the government has restored funding to the school, their rents were adjusted and everything is back to normal.

“One of my proudest achievements is to play a role in restoring the funding of Malek Fahd so that our children, our students, can have certainty and stability.”

“Our bank had threatened to reject our business because of past infighting.  But, Alhamdulillah, with the help of Allah, right after we settled our disputes, we concerted our efforts on repaying our loans.”

“The AFIC loans were taken by previous committees who were desperate to fund school building projects and make sure that there are more classroom seats in Muslim schools for our kids.

And he cut the bank loan in half, from $10 million to less than $5 million.

“This is a great blessing from Allah. I have to say here to all our brothers and sisters, try to avoid taking bank loans.”

Asked about a number of controversial emails now circulating which contain allegations of corruption and nepotism, Dr Jneid responded:

“Unfortunately, every time a member, a society, a council president, or a former employee do not get their wish-list approved, they start making accusations of favouritism and corruption. This has been the unfortunate history of AFIC for more than 20 years.

“I assure everyone, AFIC financial affairs are structured in accordance with the regulatory authorities’ requirements. All our books are audited by an external auditor who also scrutinises all Finance Committee activities.”

“AFIC is the most transparent and most democratic organisation in the Muslim community.  Every allegation is being addressed in detail.”

In a closing pitch to his constituents and a tilt to the future, Dr Jneid says:

“AFIC is the peak body for Australia’s Muslims, AFIC has thrived for 56 years, it is older than I am and Insha Allah, it will continue to grow and thrive long after I leave.

John Stapleton is an Australian journalist having worked with The Sydney Morning Herald as well as The Australian newspapers and currently writes for “A Sense of Place Publishing”.