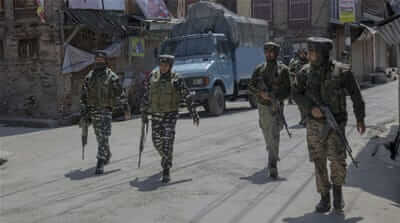 Kashmir under lockdown by Indian military.

Indian authorities is granting domicile certificates in Kashmir to thousands of Indian nationals in order to to change the demographic structure of the disputed region.

As many as 25,000 non-locals have been granted domicile certificates in Muslim-majority Jammu & Kashmir since 18 May 2020 under a New law being pushed through stealthily by the Modi government amid COVID-19 lockdown.

The certificate, a sort of citizenship right, entitles a person to residency and government jobs in the region, which until last year were reserved only for the local population.

The documents are being issued to non-Kashmiris, including Indian government officials, under the Jammu & Kashmir Grant of Domicile Certificate (Procedure)

When India revoked the semi-autonomous status of  Kashmir last year, it also scrapped the local special citizenship law, guaranteed under Article 35-A of the Indian constitution. The law barred outsiders from settling and claiming government jobs, to maintain the demographic balance of the region.

On Friday 26 June, a picture of the domicile certificate issued to Navin Kumar Choudhary, a bureaucrat originally from the Indian state of Bihar, went viral on social media.

In April, amid the ongoing coronavirus lockdown, the Indian government notified domicile laws for occupied Kashmir, making an unspecified number of outsiders eligible for residency and jobs.

According to the new law, any person who has lived in the region for 15 years, or has studied there for seven years and passed their class 10 or class 12 examination is eligible for the domicile.

Also eligible to settle and claim local citizenship rights are the children of Indian government employees who have served in the region for 10 years or more.

Kashmiri politicians across the divide have said the revocation of special citizenship rights was aimed at reversing the Muslim-majority character of the region.

A government official said as many as 33,000 people had applied for the domicile certificates since 18 May, when the rules were notified. Of them, 25,000 have been granted citizenship rights, he added.

Some 32,000 applications were filed in the 10 districts of Hindu-majority Jammu. The new inquisition: Are you now or ever been a Muslim?