The Australian Liberal government has come under heavy criticism for blocking the investigation of Israeli war crimes by the International Criminal Court (ICC) as a result of intensive lobbying by Israel.

The Leader of the Australian Greens, Mr Adam Bandt MP said that while Netanyahu is planning to annex the West Bank, the Australian government not only remains quiet on violation of international law by the state of Israel, but actively tries to block investigations of war crimes in Palestine by the ICC.

The ICC’s office of the prosecutor concluded a five-year preliminary examination of the “situation in the state of Palestine” in December 2019 concluding that there were reasonable grounds to believe that war crimes including attacks on civilians, torture, attacks on hospitals, and the use of human shields have been, or are being, committed in the West Bank, East Jerusalem, and the Gaza Strip by the Israeli armed forces.

However Australian position has been rejected by the office of the prosecutor, saying it had not formally challenged Palestine’s right to be a party to the court before.

“I am satisfied that war crimes have been or are being committed in the West Bank, including East Jerusalem, and the Gaza Strip,” the prosecutor Fatou Bensouda said. “There are no substantial reasons to believe that an investigation would not serve the interests of justice.”

The Leader of the Australian Greens, Mr Adam Bandt MP during his speech in the House of Representatives on Wednesday 13 May 2020 raised the matter of Australian government blocking the ICC probe under Israeli pressure.

“This week Palestinians and their friends commemorate the Nakba, when, in 1948, hundreds of thousands of Palestinians were displaced and lost their homes, and many were killed. Since 1948, we’ve continued to see pervasive human rights abuses committed against Palestinian people. These abuses affect every aspect of their lives.”

“Donald Trump and Benjamin Netanyahu are actively undermining a two-state solution that could deliver peace and security to the Israeli and Palestinian peoples.”

“Netanyahu intends to unilaterally implement parts of Trump’s so-called peace plan, even though it’s been rejected by Palestine and has almost no support globally.”

“It’s time for Australia to speak up, especially as Mike Pompeo flies in to Israel. It’s time to vocally oppose any illegal annexation and make it clear that there will be serious diplomatic consequences should it occur, just as there have been for other illegal annexations of territory.”

Intensive lobbying by Israel regarding this case has been confirmed by both Australian as well as Israeli officials.

In Senate estimates, James Larsen, the chief legal officer with the Department of Foreign Affairs and Trade, said that Israel had “encouraged us to make observations” to the court regarding the investigation into war crimes in Palestine.

“Israel certainly made representations to the Australian government, including myself, but others as well,” Mr Larsen said.

Israel’s PM, Benjamin Netanyahu told his cabinet in February that friendly countries had responded to Israeli lobbying over the case.

The director of the Australian Centre for International Justice, Ms Rawan Arraf said Australia’s intervention in the court process was unprecedented.

“Why is Australia going out of its way to hold back an investigation into Palestine? Australia has always been a strong supporter of accountability and the fight to end impunity. It should not stop now and it should withdraw its request,” Ms Rawan said.

“By denying Palestinians the right to justice, and protecting Israel from justice, Australia undermines the rule of law as the standard by which international behaviour is to be judged, and if necessary, sanctioned,” Rev Browning concluded. 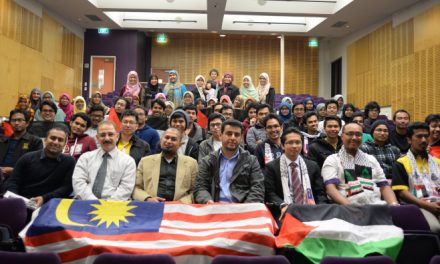