In an incredible display of interfaith harmony, a Germany Church in the capital of Berlin has aided a nearby mosque to comply with physical distancing guidelines by hosting Friday prayers.

The compassionate offer on Friday 22 May was extended to support the Dar Assalam mosque in Berlin’s Neukoelln district which usually accommodates for hundreds of worshippers, yet now, can only accommodate for 50 people at a time, to prevent the spread of the coronavirus.

Places of worship reopened in the country earlier this month, but worshippers must maintain a minimum distance of 1.5 metres apart from one another. Regrettably, the Islamic Council in Germany admitted that in April due to financial hardship it was facing bankruptcy due to mosque closures stretched over Ramadan.

Stepping up to the plate, the local Martha Lutheran church assisted by hosting Muslim prayers in both Arabic and German. The church’s pastor Monika Matthias explained that the community decision was made “to do the best in times of coronavirus” by assisting and accommodating for other faiths.

Moved by the Muslim call to prayer, the pastor expressed her appreciation for the religious sermon.

“I took part in the prayer. I gave a speech in German. And during prayer, I could only say yes, yes, yes, because we (our religious community), have the same concerns and we want to learn from you. And it is beautiful to feel that way about each other,” expressed Matthia.

The generous and conscientious act exemplifies that the Muslim community must also be willing to reciprocate and extend the same courtesy and respect to other faith-based communities.

“This has brought us closer. Whether this partnership will go on and how it will go on, that is still open, but I think getting to know each other and what we have experienced together in this time is strengthening for whatever may lie ahead,” cheered Matthia. Illustration: Soon to be completed ‘House of One’ located in Berlin, Germany. Source: Archnet.

This is not the first time religious communities have shared their collective resources in Germany.

Making religious history as the country, an ambitious shared facility is soon to be completed this year. Known as the ‘House of One’, the prayer space will be a synagogue, a church and a mosque all under one roof. Indeed, leading the way in an interfaith accord, the project reveals that mutual aid and collaboration can transcend traditional customary bounds. 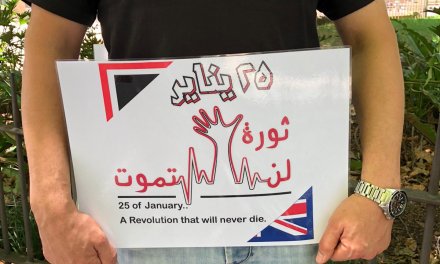 Sydney protest for freedom in Egypt