Ethical Response #1: Elders
Elders hold an important place in Islam. While they contributed to society when they were young and able in order to make the community a batter place, the community then needs to contribute to their wellbeing in their old age.

Furthermore, their wisdom and experience deserve our respect and honour. Prophet Muhammad (s) stated, “He is not of us who does not 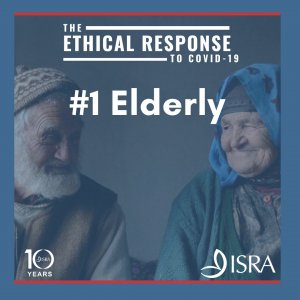 have mercy on young children, nor honour the elderly” (Hadith: Tirmidhi).

This is a strong statement; the one who does not honour the elderly is being disowned by the Prophet (s).

Such a statement cannot be taken lightly, we do not want to be one of those who are disowned by the Prophet (s).

During these difficult times, it is extremely important that we look out for the needs of the elderly in the community, reach out to them and assist them at their time of need.

They are fragile and vulnerable, and we as a society have a responsibility towards them.

Ethical Response #2: Everything in Moderation

Moderation is extremely important in Islam. In the Qur’an, Allah commands us to “…eat and drink, but do not be excessive. Indeed, He does not like those who commit excess.” (Qur’an 7:31)

Allah is clearly commanding us to be moderate and prohibiting excessiveness and wastefulness.

The ethical dilemma of hoarding has been in the news and many people are acknowledging hoarding items are going to waste since they are not being consumed and great stress is being added to the system at a time when anxiety levels are already running high. Currently, we can see through the Covid-19 situation that many people are being conscious of how much food they purchase so that others do not go without.

Many social media groups have also been created to reach out to individuals who may not be able to access what they need thus forming a sharing platform.

The responsibilities that one has towards their neighbours is greatly emphasised in Islam. So much so that, Prophet Muhammad (s) states, “Gabriel (Jibra’il) continued to advise me to treat neighbours well until I thought the neighbours would be given the right of inheritance.” (Hadith: Bukhari and Muslim)

In another hadith, the Prophet said, “He is not a believer whose stomach is filled while the neighbour to his side goes hungry.” (Al-Adab Al-Mufrad).

It’s extremely important that we look out for our neighbours, check in on them and offer our assistance when they need it. This is particularly important for elderly, disabled and vulnerable neighbours.

It’s heart-warming to hear of good neighbourly stories. There are many individuals who have written little notes for neighbours living on their street, offering to buy groceries, purchase the medication they may need, or to help out with tasks which the neighbours are currently unable to carry out by themselves.