With the anniversary of white supremacist terrorist attack in Christchurch falling mid March this year, Muslims in Australia are demanding consistent legislation against hate speech to be included in the Religious Discrimination Bill under consideration by the federal parliament.

More than 160 national and state based organisations in the Australian Muslim community have put forward a submission with proposals aimed at mitigating the chance of another terror event like those that befell Christchurch from occurring in Australia.

Articulating the concerns of the Muslim community, Australian National Imams Council (ANIC) media spokesperson Bilal Rauf talked about religious discrimination bill to include legislation against  vilification of Islam and demonisation of Muslims for their religious identity.

“For the first time, we are also actively engaged on issues of legislation with the high level of collaboration and thought which has gone into understanding laws relating to discrimination and vilification across the states and at a commonwealth level,” Bilal said.

He further added, “In a clear and unified voice, we highlighted the glaring absence of protective laws at a state and federal level.”

Bilal was addressing a joint gathering of NSW Labor party members and leaders of the Muslim community on Thursday 20 February 2020 at the Chullora offices of the Australian National Imams Council (ANIC).

“Another issue which we hope will be high on the party’s agenda is the need for appropriate laws in NSW providing protection against vilification against people based on their religious identity,” Bilal emphasised. The event saw the NSW Opposition Leader  Jodi McKay together with her entire shadow cabinet assuring more than 70 leaders representing the NSW Muslim community that NSW Labor stands by them, with them and up for them.

She thanked the Grand Mufti of Australia, Dr Ibrahim Abu Mohamed and Sheikh Shady Alsuleiman, President of ANIC for hosting them and commended Lakemba MP, Jihad Dib for the initiative to bring them together.

It was an unprecedented milestone event where the Muslim speakers articulated the message of Islam and Australian Muslim History as well as their concerns to the Labor politicians who attentively listened and provided reassurance for the community. Sheikh Shady Alsuleiman during his brief presidential address thank Jihad Dib and Jodi McKay for their initiative in community engagement and initiated a round of introductions for each of those present to give their name, representative organisation and the area they live in.

The Grand Mufti of Australia, Dr Ibrahim Abu Mohamed addressed the audience talking about the salient features of Islam including peace, tolerance, harmony and understanding amongst people of diverse background and faiths. “Discrimination, bigotry, vilification and hatred leads to conflict and violence in the society and we have witnessed its results in Christchurch last year and elsewhere,” Dr Ibrahim Abu Mohamed said.

The Mufti also highlighted the contribution of Muslims to Australia and their successful integration into the Australian community. She pointed out the findings of the ‘Islamophobia in Australia Report 2’ by Charles Sturt University released late last year that found 71% of incidents targeted Muslim women.

Ramia, a professional lawyer who was born and raised in Australia shared her concerns of her own safety during recent years and that of her children as a result of potential Islamophobic attacks.

After Maghreb prayers and during dinner, Imam Ibrahim Dadoun ANIC Director of Public Relations showed a presentation on Islam, Australian Muslim History, statistics of Muslims and mosques and Islamic Centres in NSW. Jihad Dib during his address thanked both Jodi McKay and Sheikh Shady for taking up the initiative to come together and refused to disclose Year 9 results of Sheikh Shady while he was enrolled at Punchbowl High when Jihad was the principal there.

“My parliamentary colleagues, this is the Muslim community I talk about that is constantly changing, but I don’t talk about Muslim issues only, I represent all my electorate,” Jihad said.

During her address, the state member for Strathfield, NSW Opposition Leader Jodi McKay MP who is also the shadow minister for Multiculturalism expressed her delight to be present at this gathering.

She introduced members of her Shadow cabinet and thanked four other MP’s who have made the efforts to attend the event from regional NSW.

“Sheikh Shady, I am the women that keeps her word and you are the man who kept your word and here is the result tonight.”

“Muslim community has great issues.  I make the commitment that we stand beside you and we stand with you.  There would be no issues that will divide us.  The community leaders, you have given your time and it means so much to us,” Ms McKay concluded.

She also offered to reciprocally host Muslim leaders at the NSW Parliament House during the next few months and possibly engage Muslim schools for a dialogue on education policy in NSW.

Towards the end Bilal Rauf acknowledged how much ANIC highly valued this unique engagement between community leaders and politicians and thanked all those taking the time to attend this event. Bilal Rauf, ANIC Media Spokesperson and MC for the event.

“Our community is experiencing a transformation, we are seeing a new generation emerge and assume positions of leadership and engagement at various levels and we have voices emerging who identify, first and foremost, as Australians,” Bilal said.

He further added, “We are an emerging generation born and raised in this country who want to make a difference and ensure that our country and society improve for the betterment of everyone, not just a few.

Bilal ended the program by thanking all those present and urged the politicians for further engagement with the Muslim community specially during the upcoming month of Ramadan. 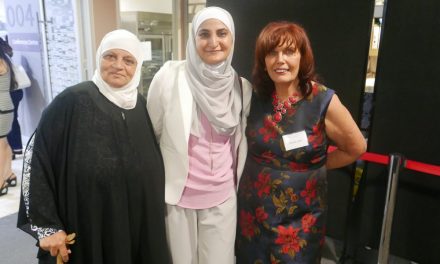