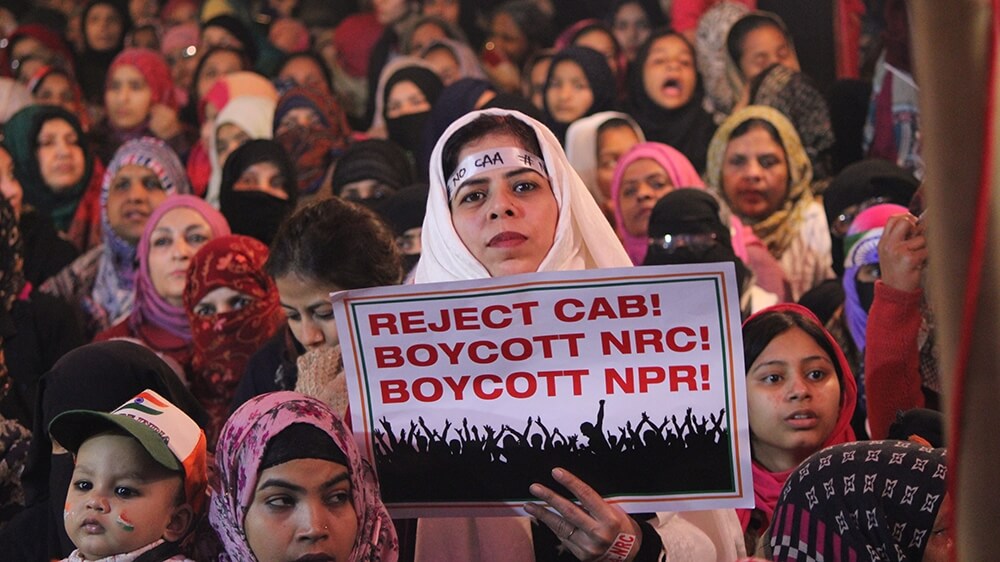 The Shaheen Bagh protests, against discriminatory laws being enacted by the ruling Hindu nationalist government in India, led by women in Okhla near the prestigious Jamia Millia Islamia University in new Delhi have now been held for almost 2 months.

A number of BJP leaders’ hate speeches against anti-CAA protesters dubbing them as anti-nationals and traitors has possibly led to at least four armed attacks at Shaheen Bagh by Hindu far right extremists during the last one week alone under the heavy presence of Delhi Police.

After being silent on the issue and refusing to enter into any dialogue addressing the demands of the India-wide and global protest movement, on Monday 3 February, PM Narendra Modi called Shaheen Bagh protests “anarchy” accusing the opposition parties of engineering the protests and asking Delhi Police to forcibly stop it.

The 24/7 sit-in peaceful protest during extremely cold weather began on Wednesday 15 December 2019 in response to brutal attacks on Jamia university students by Delhi police entering classrooms, dormitories, library and the Jama Masjid at the university.

The leaderless protest mainly by women of young and old ages is not only against CAA and police brutality but also against the BJP government in general for its blatant policies against the 200 million strong Muslim minority in India.

Since coming to power in 2014 and being re-elected in mid 2019 with a heavy mandate the Modi government has enacted a number of policies to marginalise the large Muslim minority in the country, a move towards making them second class citizens.

A number of BJP leaders including Modi have their ideological roots with Hindu supremacist movements such as RSS and Hindu Mahasabha who have documented programs for the dis-empowerment of its large Muslim minority for more than a century.

Now that the Hindutva forces are in power, they are accelerating their efforts by enacting laws leading to denial of citizenship, religious discrimination and outright oppression of Muslims in India.

The enactment of the CAA in December 2019 comes in the wake of  total military lockdown in Kashmir since 5 August 2019, granting of historic Babri Mosque land to build a temple in November 2019 and denial of citizenship to 2 million people mostly Muslims in the state of Assam last year through a citizen’s register that will be soon expanded to cover the whole of the country anytime soon.

Muslims in India have gradually been dis-empowered since the partition of the country in 1947 where 2/3 of their population went to Pakistan (again divided 1/3 each between West Pakistan and Bangladesh).

The Muslim men, with the fear of being called communal or anti-national have largely remained mute for the last 70 years, hardly making any demands for their legitimate rights in new India.

Shaheen Bagh protests are a symbol where Indian Muslim women, young and old are putting their men to shame by coming out of their homes, saying enough is enough, India is their motherland and that of their children and demanding fair, just and equal treatment in India of tomorrow.