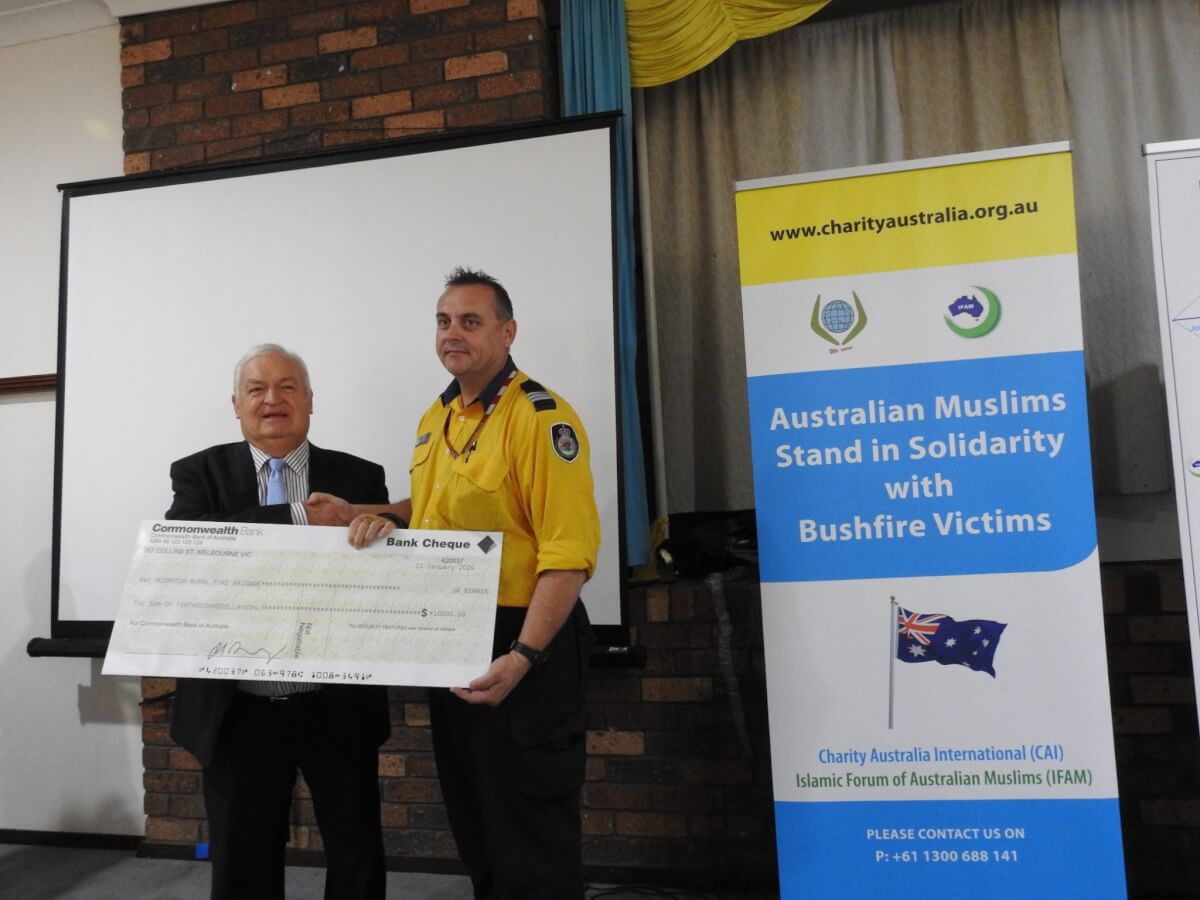 The presentation was made at a multicultural event attended by RFS and other government officials as well as interfaith and community leaders conveying the message of harmony, respect and friendship to all living in the area. A large number of people turned out to attend the event including Sikhs, Hindus, Christians, as well as Muslims living in the neighbourhood.

Mr Rais Khan thanked the guests for sparing their times in coming to MPM for while explains that the purpose of this building was to give maximum benefit to the communities living in the area for their social needs and fulfilling their Islamic duties and needs. He also mentioned the support being extended from the MPM to RFS at these tough times of bush fire catastrophe.

“Being Muslims, we have a belief that Almighty Allah is in control of everything, so we prayed Salat-e-Istasqa to ask God’s help to ease this situation of devastation in Australia,” Mr Rais said.

He expressed his grief and pain for those who have lost their lives and many more who are suffering during this disaster. He remarked that doors of Marsden Park Masjid were open to all who needed shelter in this hour of need.

He told the audience that IFAM managed to forward 20 tons water, milk, food items and clothing to RFS as a token of small help to the victims of bushfire.

Sheikh Shady Alsuleiman, President of ANIC greatly admired IFAM for carrying out the noble cause of helping humanity and reaching out in the fields for help. He also expressed great respect and honour for RFS and other volunteers who put their lives in danger in order to help saving other’s lives.

He encouraged other organization to step forward and stand up for help and solidarity. following the teaching of Prophet Muhammad (s) to help humanity without any discrimination towards race or colour. Mr Phil Cook, Captain of RFS in Plumpton expressed his feelings of gratitude for IFAM for their continuous support.

He spoke about the nice BBQ arrangement by IFAM for all RFS staff and volunteers a few days ago which touched the hearts of all participants for their zeal and spirit. He also briefed the moral support being extended to RFS from different communities in these difficult times, which helped them to stand firm at the forefronts.

“The catastrophic tragedies like this are not fought without the broader help of communities,” Captain Cook remarked.

Father Patrick McInerney from the Columban Centre for Christian-Muslim Relations gave an inspiring speech quoting from the Quran in which Allah Almighty says that ‘Indeed all believers are brothers (and sisters)’. He noted that in his opinion this verse applies to all who have a faith and wants to help others for the sake of humanity and cannot leave the people sufferings un-noticed when they come across them.

Mr Tony Bleasdale, the Mayor of Blacktown council was invited to formally inaugurate the Marsden Park Masjid.  During his address, he thanked all those present for participating in this event which was important for good relationship among them.

He said that he was proud to be the Mayor of Blacktown council which was rich in adopting so many different cultures from all around the world. He said that more than 90 languages were being spoken in this council of Blacktown while some of these were being taught in local schools.

Mr Bleasdale thanked IFAM for supporting RFS in these tough times and appreciated for their continuous help.

The first Friday prayer at the Marsden Park Masjid was held on 27 January 2020 where the Khutbah (Sermon) was delivered by Imam Usaid Khalil, Secretary General, IFAM, who also lead the congregational prayer.