AMUST was recognised as the “Publication of the Year” with the award received by its Multimedia Technology Manager, Rubinah Ahmad while Zia Ahmad, Editor-in-Chief received the award for “Best Print Report” for his reflections on the ground from Christchurch soon after the Mosques’ terrorist attack in March 2019. 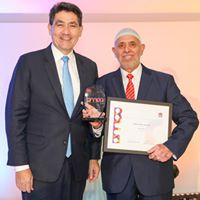 The annual NSW Premier’s Multicultural Communications Awards (PMCAs) recognise excellence in the multicultural media and marketing industry where the awards program celebrates the achievements of marketers, journalists, editors and producers. Reports on dowry abuse, the Christchurch terror attack and an innovative multilingual radio podcast for children were among the winning entries at this years Premier’s Multicultural Communications Awards. The event was attended by more than 300 guests including politicians, businessmen, community leaders from all over New South Wales as well as the finalists and award winners. Amaani Siddeek (left) was a finalist for the Alan Knight Student Award.

The awards were presented by the Acting Minister for Multiculturalism, Dr Geoff Lee who said that the NSW Government was proud to celebrate the exceptional journalism of multicultural media and marketers.

“Our best and brightest professionals raised the standard even higher this year with fearless journalism and innovative marketing,” Dr Lee said.

He further added, “Tonight’s winners set the benchmark for aspiring multicultural media and marketing professionals, not just in our State but across the country.”

“Tonight’s winners displayed courage and tenacity in their reporting, tackling some very difficult topics. I’d like to congratulate everyone who entered because all of our multicultural media play a key role in our society,” he concluded. The AMUST team at the Awards night.

“I would like to congratulate all tonight’s finalists and winners for your dedication to showcasing and communicating our cultural diversity in creative and innovative ways,” the Premier of NSW Gladys Berejiklian said.

She further added, “ Your courageous work across all media channels including radio, television, print and digital media gives voice to important topics that would otherwise remain unheard.”

Mr Joseph La Posta said that Multicultural NSW promotes community harmony and social cohesion in one of the most culturally diverse states in the world. We come from more than 307 ancestries, speak 215 languages and dialects, and follow 148 different religious beliefs but we all are united as a one family, one Community in Australia. The entertainment at the event was provided by several performances by Mitch Tambo.

Acting Minister for Multiculturalism Geoff Lee held a doorstop for multicultural media ahead of the PMCAs where he pointed out its significant contributions towards information dissemination in a balanced way.

On being questioned by Zia Ahmad, AMUST Editor-in-Chief on the response of the NSW government for the Islamophobic attack on a pregnant women in his electorate of Parramatta on Wed 20 November, Dr Lee said that the government took this matter very seriously and the matter was currently with the law enforcement authorities. The Winners of the 2019 Premier’s Multicultural Communications Awards are: