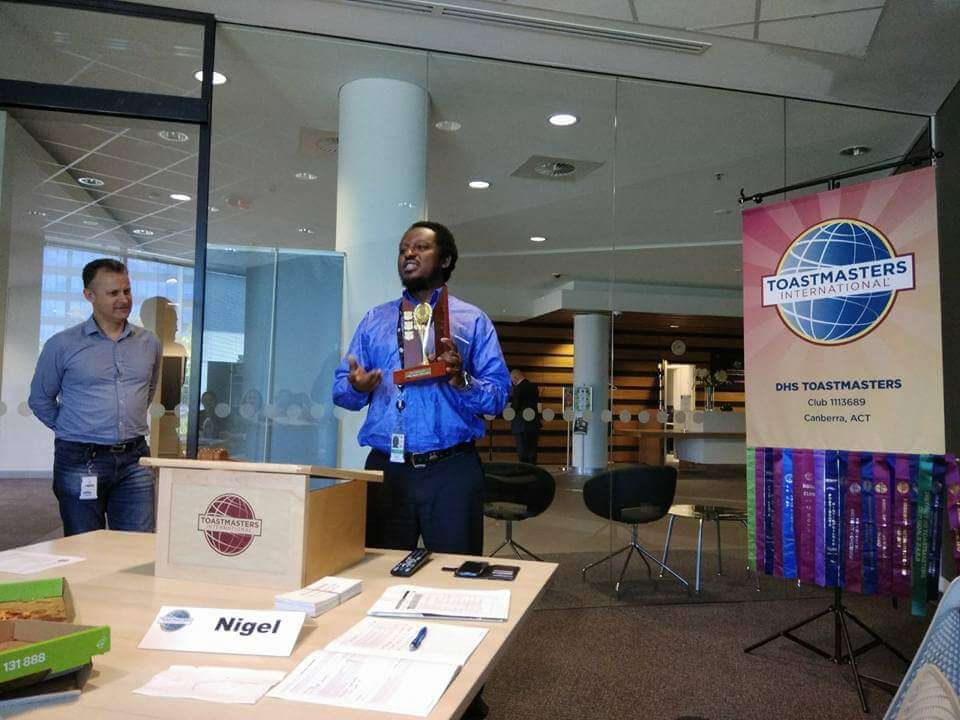 The nation’s capital will soon be home to a Muslim-run Toastmasters International (TI) club.

To register the new club, the sponsors of the potential club have held their first Toastmasters’ club demonstration meeting in the main hall of the CIC complex on Saturday 9 November 2019. A reasonable number of people from the community attended the demonstration meeting, and a few people signed up on the spot to become club members.

Earlier, as part of the starting a new club process, the proposed club initiators Amadu Barrie and Saad Shamsi, club sponsors Susan Prunster and Pamela Cooper and club mentor Andrew Maine agreed to have two club demonstrations for the target audience at the CIC premises at 221 Clive Steele Avenue in Monash. Amadu has participated in several TI competitions. He took out 1st Place for the Area 26 and DHS club International Speech contests in 2018. He was also awarded the DHS Toastmasters Club 2016/2017 Symmons Members Choice Award in 2017.

Saad said that he was very pleased with the support from the EC and hope that the community will use the club as a platform “to become more confident public speakers and stronger leaders in every sphere of their lives”.

President of the CIC, Suhail Khan agrees with Saad.  “The Canberra Islamic Centre supports all organisations that help our members to be better Muslims and Australians. Toastmasters is a time tested organisation that helps its members to be good and confident public speakers which is an essential quality for one’s self confidence and leadership,” Suhail said.

The CIC is the largest Islamic organisation in Canberra and the surrounding regions. The Centre compromises of a mosque, library, community hall and an industrial size kitchen.

Through the hard work of the CIC executive, support from the community and the Embassy of the State of Kuwait the Sabah Al-Ahmad Masjid and Islamic Education Centre was completed and opened on 5 May 2018.

The library was the vision of the early elected executive committee members to facilitate the collection of the largest repository of books on Islam in the Southern Hemisphere.

The main hall with a 500 seating capacity, a kitchen and dining area are available for hire for public functions.

Over the years, several international and interstate guests such as the late Sheikh Ahmad Deedat, the Governor-General, the Chief Minister of ACT, Federal and State parliamentarians, ambassadors as well as high profile Australian Muslims including Waleed Aly, and Hazem Al Masri, have attended CIC gatherings. Ramadan Market with a twist