Mawlana Tariq Jamil, the popular Pakistani speaker  and YouTube celebrity paid a visit to Australia during early October addressing thousands of people, both males and females, during mass speaking events in Sydney and Melbourne. The Sydney event on Monday 7 October was attended by almost 4000 people hosted by OnePath Network while the Melbourne event was held on Saturday 12 October hosted by Al Siraat College attended by more than 1000 people.

Mawlana Tariq Jamil is a scholar and preacher associated with Tablighi Jamaat and frequently delivers Islamic speeches at rallies in which he preaches peace and harmony, tolerance and respect for all. The sold out event in Sydney, held at the Whitlam Centre in Liverpool with outdoor Maghreb prayer in large congregation was very well organised by OnePath volunteer team with good crowd control, mega screen TV projections and a superb sound system that highly facilitated the speech delivery by the Mawlana. The program was started by CEO of OnePath, Mr Malaz Majanni welcoming the Mawlana and the audience and highlighting the services provided by the network. He introduced the sponsors of the event whose representatives briefly introduced their businesses. During his one and a half hour speech, Mawlana Tariq Jamil mesmerised the audience by his unique way of delivering the message of Islam in the context of modern living addressing social problems and providing practical solutions.

Mawlana Tariq Jamil spoke to mainly Urdu speaking audience that included substantial number of females and young people, continuously quoting from Quran and occasionally from Hadith in Arabic with prompt rendering in Urdu for easy understanding.

The ever smiling relaxed Mawlana with his articulation on stage and a humorous style delivered his message of social reformation cutting simple jokes in Punjabi that kept the audience very much engaged throughout the long speech. The Mawlana told in graphic detail the miraculous birth of Prophet Isa without a father saying that Allah has the power to do anything that us humans can not sometimes perceive. He pointed out the great rights that Islam gave to women and urged his audience to respect women describing how Prophet Mohammad (s) respected his daughter Fatima by greeting her, standing for her and welcoming her during her visits.

Mawlana Tariq Jamil emphasised the importance of prayer and pointed out that five times prayers are compulsory and should never be missed. In a passionate way he graphically related the incident of Karbala where Imam Hussain (r) pleaded to his oppressors to give him time to offer his prayers before his martyrdom. 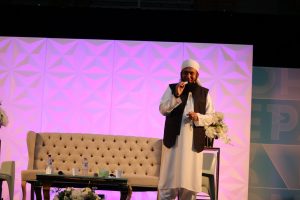 He advised Australian Muslims to live in this country as law abiding citizens, deal justly with fellow Australians and be loyal to their homeland.

“You are very fortunate to be living in this country where your tax dollars are spend for your welfare unlike many countries with endemic corruption, so please pay your taxes, maintain fairness in business dealings and work hard to earn honest living,” the Mawlana advised. 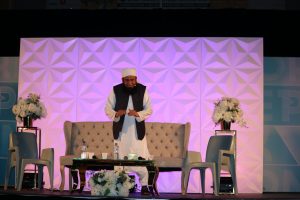 Mawlana Tariq Jamil called for building good relationships amongst husband and wife, between siblings and between parents and children. He pleaded that parents must give time and value to their children specially teenagers and respect their opinions and wishes. 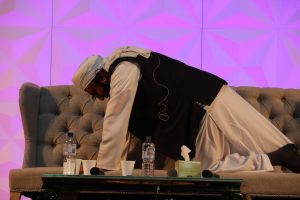 He graphically demonstrated how much the Prophet Mohammad (s) loved his grandsons, playing with them, let them ride on his legs and on his back and showed great compassion. The Mawlana emphasised the rights of a wife over her husband to provide privacy for her including seperate living quarters in an extended family home if not a seperate home in order to mitigate issues between in-laws.

He concluded by saying that his message of Islam is for everybody, ordinary people, sportsmen, politicians and celebrities without taking any rewards from them. 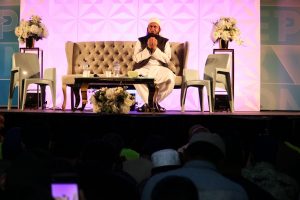 He mentioned of his dialogue with Prime Minister Imran Khan who he believed was doing a good job and he hoped that he will get good support from fellow Pakistanis to solve some of the problems the country was facing.

The event ended with a long dua by him for Muslim Australians, the Muslim Ummah and for global peace.

Mr Malaz Majjani presented a plaque to Mawlana Tariq Jamil as a token of appreciation on behalf of OnePath Network. The Sydney event was sponsored by:

The event was sponsored by: 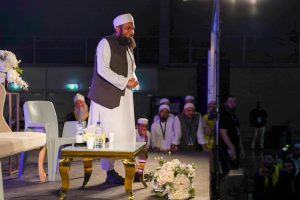 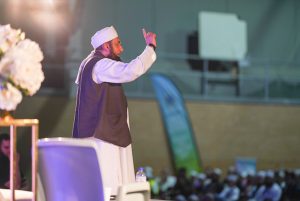 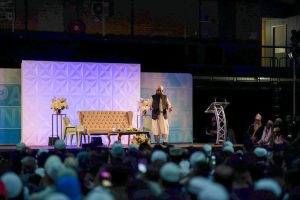 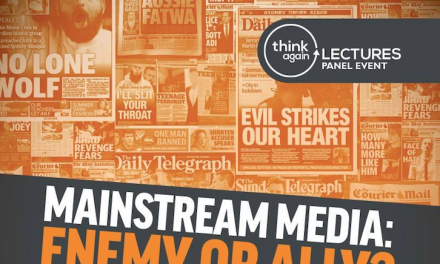