The award-winning author, Hanifa Deen entertained a large group of Sydneysiders, overwhelmingly women with her unique style of storytelling on Saturday 19 October 2019 at ISRA offices in Auburn.

The topic of her presentation was “Confessions of an accidental author: How I became a storyteller” where she explored the secrets of writing intuition, her ability to listen to her inner voice and to engage herself linking the past with the present and value her own personal history.

The highly successful free event that included a multicultural supper was organised by ISRA Australia and sponsored by the Cumberland Council. The audience listening to Hanifa’s presentation learnt the rhythm of writing with the head and heart with the author of seven renowned books and a writing career that began 25 years ago that took her on a ‘Journey Among Australian Muslims’.

Hanifa Deen of Pakistani ancestry, originally from Perth currently resides in Melbourne. She has been a teacher, researcher and senior public servant and for the last fifteen years she has been a social commentator and writer of non-fiction books.

Hanifa has written widely on the issue of Australian Muslims and Muslim women, including the award-winning books Caravanserai, Broken Bangles and The Jihad Seminar.

The event was MC Dr Mahsheed Ansari, a lecturer from Charles Sturt University (CSU) who remarked at the popularity of Hanifa as evidenced by a packed house at ISRA auditorium.

Hanifa was introduced by Ms Katy Nebhan, a PhD student at the University of Sydney specialising in Australian Muslim History. Highly inspired by Hanifa, Katie talked about Hanifa’s ancestry, writings and contribution to history of Muslims in Australia.

“I met her in 1998. When her book, Caravanserai came out. It was given to me by a  my colleague  to read it.  I read the book promptly.  Hanifa through her writing gave Muslim in Australia a voice,” Katy said.

During her insightful yet humorous presentation with the help of overhead slides, Hanifa Deen talked about her life, her ancestry, her family and how she became a writer.

“Originally, I was a teacher and later I was writing speeches for politicians.  I never thought of becoming a writer.  Brian, one of my colleagues who was a publisher at Penguin, 25 years ago trapped into writing a book proposal and send it to publishers Allan & Unwin. So I did and my first book Caravanserai was born,” Hanifa recalled.

“Why do I write about social Justice?  This is because of my family background.  My family butted heads with the White Australia Policy that was established in 1901,” she said.

Ridiculing the White Australia Policy, Hanifa said, “At that time if Jesus came to Australia they won’t let him in.  Amongst Muslims, those days only some Bosnians were allowed entry into Australia because they were white.  It was nothing about religion.”

“During my research for writing, I realised that there were some exploiters and some exploiters in the society.  Australians called us mossies and hence we Muslims are Aussie Mossies.  I was trying to breakdown the stereotype.  I started to travel around Australia to collect the stories of Muslims and I came to Lakemba,” she said while talking about her book ‘Ali Abdul v The King: Muslims stories from the dark days of White Australia’  published in 2011.

“I went to detention centre where women and children were behind the barbed wire.  One day the boss in the detention centre decided to do something for the children during Christmas time.   Someone dressed up as a Santa and  calling children by their number instead of their names to give them presents.  Santa was told to call them with their name, but Santa mentioned that he doesn’t know their names, he only knows them by number,” she recalled.

“Bilal Cleland (a regular AMUST columnist) once asked me to attend a seminar on a court case that will conclude very soon but it went on for five and half years resulting in my book ” The Jihad Seminar,” she said.

“There were 300 people who never met Muslims.  Two non-Muslims, they said we didn’t know that Muslims laughed and Muslims made jokes.  A lady approached me and said, I come across a women every day, a women with hijab on the train.  She asked me what should I do.  I said, just smile at her.” While researching Australian archives in Canberra, Hanifa came across a number of documents and photos of handsome Muslim men known as the Ghans, one of them turned out to be her grandfather who came to Australia in 1886.

“In 1901 my grandfather brought his wife and she was pregnant and gave birth to my father.  She stayed alone no other Muslims women were there.  She went back with my father when he was a child and later my father came back to Australia when he was 21,” Hanifa related her family history.

Hanifa showed photos of a number of cameleers and other early Muslims describing their stories in a most interesting way while totally engaging the audience for almost 90 minutes.

The program ended with a Q&A session and signing of her books bought by some members of the audience. 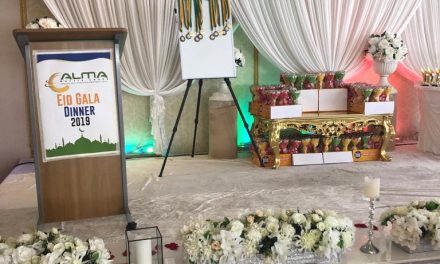