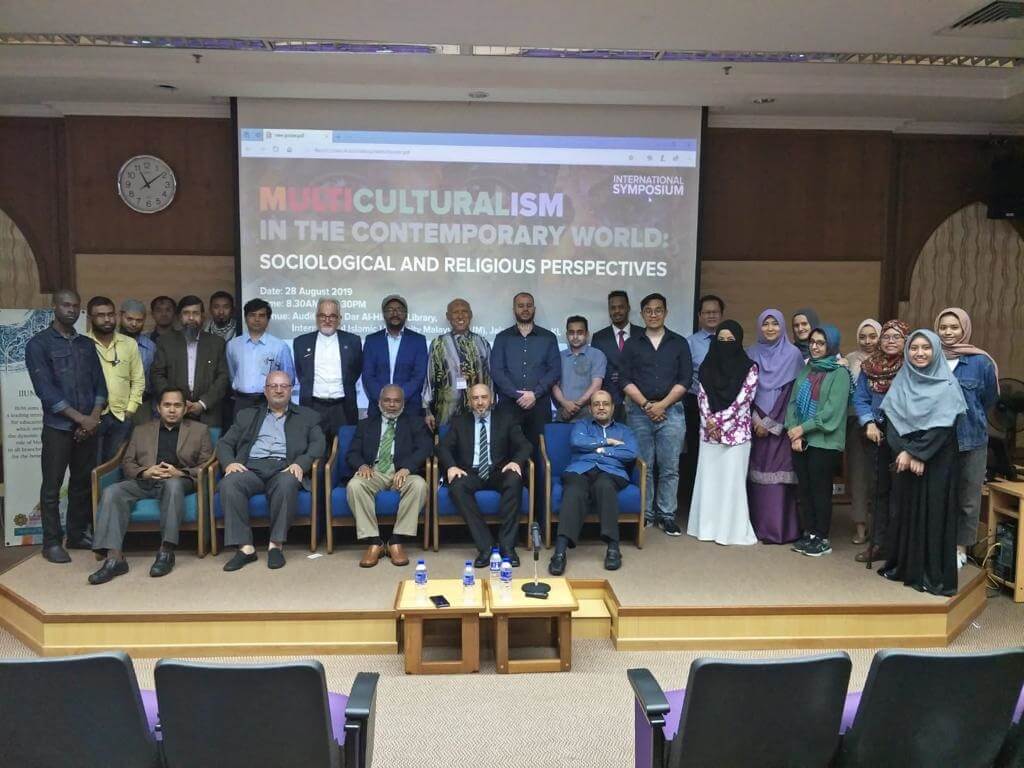 A day-long symposium “Multiculturalism in the Contemporary World: Sociological and Religious Perspectives” was held at the International Islamic University of Malaysia (IIUM), on Wednesday 28 August 2019 at the university’s Library Auditorium in Kuala Lumpur, exploring the strengths and problems of diversity.

A number of speakers from Australia, Malaysia and the UK emphasised the need for a multicultural, inclusivist approach to solving diverse problems in the modern world, particularly in societies with large migrant populations, such as Australia and Malaysia.

Organised by  Associate Professor Isharaf Hossain, Co-Founder of Muslim World Research Centre (MWRC) based in Kuala Lumpur, and Professor Waleed Faris at the International Islamic University Malaysia (IIUM), Director of the International Institute for Muslim Unity (IIMU), sponsored, among others, by Muslim Youth Movement of Malaysia (ABIM) and Islamic Renaissances Front (IRF), Malaysia, and supported by the Australian Federation of Islamic Councils (AFIC) and The University of Southern Queensland (USQ),  from Australia, the seminar heard the speakers’ views from diverse social scientific  and religious viewpoints. During the Opening Session of the symposium the Deputy Rector (Internationalisation and Global Network) of the IIUM, Professor Dr Nor Faridah Bt Abdul Manaf emphasised the value of international engagements on diversity and welcomed the participants and presenters to the IIUM. Dr Khan emphasized that cultural diversity is a reality of the modern world, with many now living in culturally diverse communities, and large scale migration and mass movement of a large number of refugees have made this diversity a reality almost all over the world. As a consequence, he  said, it has become essential to come up with a common social narrative that ensures inclusiveness of every individual in the community, with Multiculturalism as  an inclusive social and political term that proves a platform to unite people of different origin and persuasion – as  no single narrative under any ethnic or cultural or religious umbrella would provide a common identity of a nation with diverse population. He drew attention to the fact that this is particularly important for the minority communities to safeguard their cultural identity while becoming an integral part of the wider society. He covered the Multicultural Statement (united, strong, successful) of the Australian Federal Government (2017), Multicultural Queensland Charter (2017),  and USQ Multicultural policy and strategies in his presentation.

The afternoon session was a roundtable discussion forum,  moderated by Professor El Mesawi. Many issues, problems and prospects of multiculturalism were openly discussed in this session by representatives of many academic, research, community, ethnic and religious bodies in Malaysia. In this session, Dr Khan  focused on the status of humans on earth from the Qur’anic description of ‘khalifah’ (representative) and ‘insan’ (mankind), and drew attention to the fact that each human individual was invoked with the spirit (rooh) from Allah, and that He has created each human with the best stature and honoured the son of Adam; that, as a blessed creation with the spirit from Allah,  every human being deserves to be respected regardless of race, gender, religion and ethnicity.

From there, he went on to note that the peace, stability and development of  nations with migrant populations such as Australia and Malaysia,  are largely dependent on successfully managing the diverse population and engage them in productive activities with mutual respect and dignity, through effective full participation of the people in nation-building activities, by ensuring a sense of their belongingness , and acknowledging their  contribution, as in Multiculturalism.

Other participants more or less echoed the same sentiments at the highly successful symposium.