World-leading laws to tackle modern slavery could be at risk of being watered down or even dumped under the scope of a review into the legislation announced by the NSW Government, prominent Australian organisations have warned on Wednesday 7 August.

A year after the NSW Government passed laws positioning itself as a global leader in the fight to end modern slavery, the legislation is languishing after being sent to an additional review.

On the one-year anniversary of the Modern Slavery Act being passed by the NSW Parliament, nine prominent Australian civil society groups have united to call for the historic laws to be implemented and ensure that any review does not remove critical components of the legislation.

The group say that when implemented, the legislation will position the NSW Government as a global leader in the fight to eradicate modern slavery and have a tangible impact on the lives of people trapped in slavery in NSW and around the world.

But the group – which includes Oxfam Australia, Stop the Traffik, Hagar and the Human Rights Law Centre – is concerned that instead of moving to implement the laws, the NSW Government has this week chosen to send the Modern Slavery Act back to a Parliamentary Committee and potentially open all elements of the legislation to further review.

“The NSW and Federal Modern Slavery Acts are complementary steps towards eradicating the most extreme forms of labour exploitation,” said Carolyn Kitto, Director of Stop the Traffik.

“The NSW economy, the seventh largest in the Asia Pacific region, has a big footprint when it comes to the estimated 25 million people trapped in slavery on our doorstep. Enacting strong State legislation will help NSW to take responsibility for the part we play. Civil society stands ready to work with the NSW Government to strengthen the Modern Slavery Act and ensure it is not open to faults or challenges.”

“These must be protected as part of any review of the Act,” Ms Kyriacou said. “No supply chain – from the fashion industry to building, electronics or even banking – is completely immune from extreme forms of worker exploitation. NSW must continue to take this human rights risk seriously.”

The groups said the NSW Government still had the opportunity to implement strong legislation for the more than 4000 victims of Modern Slavery in Australia and the tens of millions of people in our region and beyond.

“At a time when other parliaments around the world are looking at strengthening their Modern Slavery legislation or introducing strong, full human rights compliance beyond slavery, this is no time for NSW to back away from an Act passed just 12 months ago,” Ms Kyriacou said.

Listen to ABC Religion and Ethics Report half hour program produced at the NSW Parliament House on 4 July 2019 with Andrew West’s interview with Kevin Hyland:
https://www.abc.net.au/radionational/programs/religionandethicsreport/past-programs/. 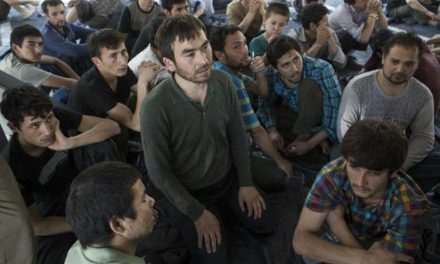