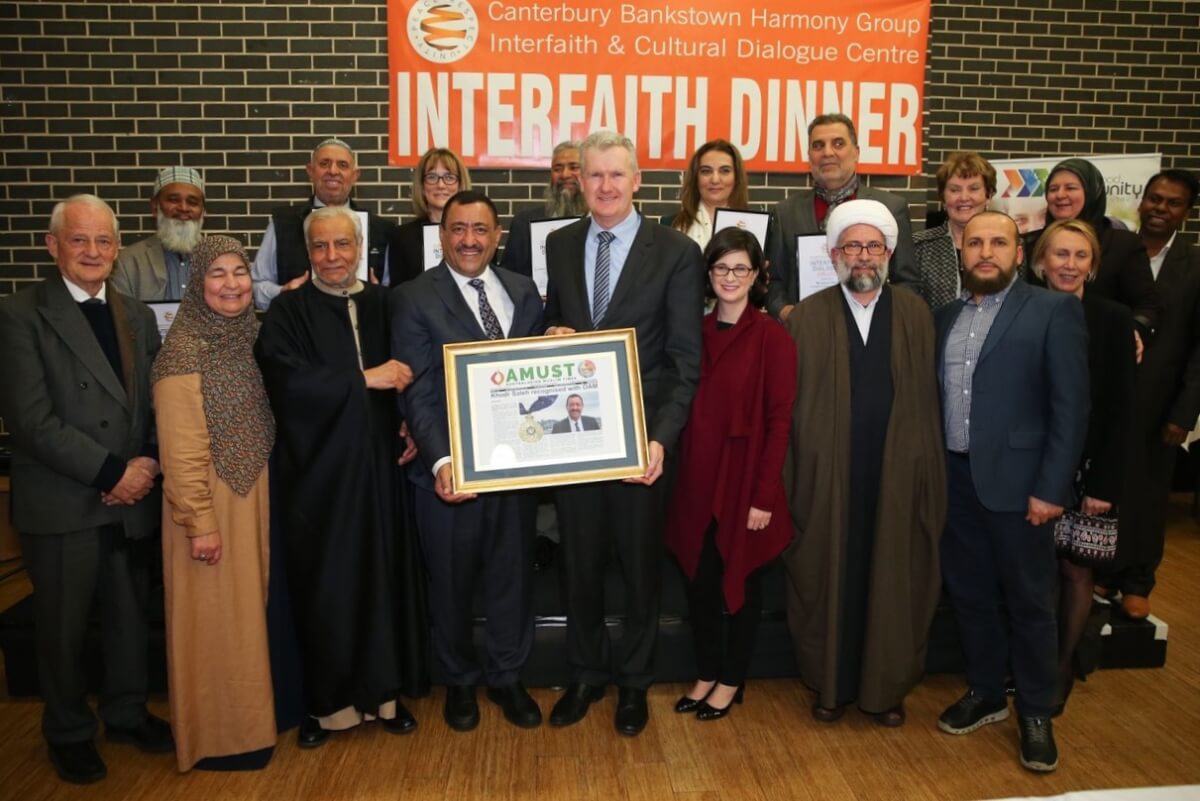 The Canterbury Bankstown 13th Annual Interfaith Dinner was held on Tuesday 6 August 2019 with the theme “From Christchurch to Sri Lanka – Interfaith and cultural dialogue against violence and hate”. The event included presentation of awards as well as recognition of Order of Australia for Mr Khodr Saleh OAM. The event was attended by politicians and community leaders representing Muslim, Christian, Buddhist and Hindu faiths attended as well as representatives of a number of organisations and institutions from the Canterbury Bankstown local area.

The audience were welcomed by Mr Khodr Saleh and addressed by a number of speakers including the Grand Mufti of Australia, Dr Ibrahim Abu Mohammed, Member of Watson, Hon Tony  Burke, the former Australia’s Special Envoy for Human Rights, Hon Philip Ruddock, Rev Ryan Epondulan from Columban Centre for Christian-Muslim Relations and Rev Heather Joyce Topp from the Buddhist Council of NSW. “Within our Canterbury Bankstown Harmony group, we are always believe that sharing a meal together is important, it creates unity and respect within the community and the community gives you a sense of belonging, building bridges of understanding and harmony,” Mr Saleh further added.

A number of individuals including Jane Ms Jeffes and Mr Issam Obeid and orgasnisations including multicultural media outlets such as AMUST and Suprovat were presented with “Interfaith Dialogue Awards” signed by Tony Burke MP and Khodr Saleh OAM in recognition of their great contribution and support towards Interfaith dialogue and harmony within Australia. A number of speakers congratulated with great applause from the guests present Mr Khodr Saleh OAM for receiving the Order of Australia announced on the Queen’s Birthday 2019 in recognition of his services to the Canterbury Bankstown Community and for advocacy of multi-faith relations and for diverse cultural groups.

During his keynote address the Grand Mufti of Australia, Dr Ibrahim Abu Mohammed commended such gatherings for building bridges and safeguarding the community from many challenges.

“One of those challenges is the outbreak of hatred and violence, often seen as two sides of the same coin. This year we saw a group of senseless murderers carry out attacks on churches and hotels in Sri Lanka. Fear filled the streets and innocent souls were taken while they engaged in worship on their holy day. It was a tragic attack that overwhelmed us with grief and despair.

While across the Tasman sea, the dark face of Islamophobia reared its ugly head and snatched the lives of 51 innocent souls. The world witnessed in real time, a man driven by white supremacist hatred execute a massacre on the peaceful streets of Christchurch, on the holy grounds of Masjid Al Nour.

By any measure of humanity and faith, these acts carried out by the perpetrators are undoubtedly a crime against humankind and are universally condemned by all faiths. A reminder once again that a persons actions are not necessarily a true reflection of their faith.

A question that we should be asking ourselves is, what happened to turn these human beings into such hateful murderous monsters. A person does not wake up one day and decide to commit these heinous acts. This transition doesn’t happen overnight. Rather, it is cultivated over years of racist, xenophobic, and agenda driven media coverage, coupled with dog whistle politics. This deadly combination is what creates the likes of the Christchurch terrorist, who filmed his bloodshed for the thousands of like-minded hateful mobs to see.

If left unchecked, this increasing fear and hatred will spawn a home grown culture of hatred and violence, evolving from a chain of unrelated events to an ideology that penetrates society like a cancer.

With that in mind: I believe our role, our responsibility and our mission as leaders of our communities is to face up to this hatred head on. To counter its spread with words, with shows of unity and with calls for legislation that criminalize it. To put an end to it and to defend our society and people against it. This threat also obliges us as leaders to stand besides the victims and their families in love and support, and to extinguish the fires of rage and retribution.”