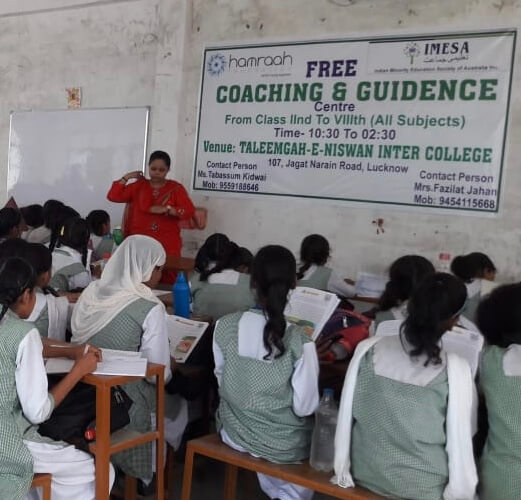 The ladies-only event included clothing stalls showcasing the latest trends in the world of clothes from India and Pakistan. A fashion show parade sponsored by Sydney’s boutique Roshan Fashion drew rapturous applause from the crowd.

The Children also did their own show wearing traditional subcontinental costumes.

A short film by IMESA drew the attention of the audience to the issues Muslims face in India due to lack of education. Muslims lag far behind other communities in education at all levels.

In higher education, Muslims represent only 4.4 % although they constitute more than 15% of the country’s population.

Prestigious government jobs have very little representation of Muslims. Muslims have been found to be only 3% in the IAS (Indian Administrative Services), 1.8% in the IFS (Indian Foreign Services) and 4% in the IPS (Indian Police Services).

At the same time, Muslims have a very high representation in menial jobs such as rickshaw pullers, handicraft factory workers and other labouring jobs.

A large number of the Muslim population is engaged as child labour in homes, in restaurants, in shops and in factories.

NSW MP Ms Julia Finn described the situation for in India as alarming as tens of millions of Muslim children face a dire situation. She applauded efforts of IMESA and described such projects of great humanitarian significance. IMESA’s main project is called Taleemi Jamaat, a volunteering body to work towards educational upliftment of poor in India.

The project aims to get poor children admitted in school, ensure they do not drop out in early classes, provide for their uniforms and books,  help parents for the loss of income as their child has to leave his/her work as a child labourer.

A major activity undertaken by project teams is running of evening classes to ensure that these poor children are able to study in the educational environment under the supervision of a teacher as their uneducated parents are unable to guide them.

IMESA has already started the projects in North Indian cities of Lucknow and Saharanpur and aims to expand it in other cities and towns across India.

You can donate to the project through IMESA’s website https://imesa.org.au/.