A renowned figure in the education sector of Pakistan Syed Waqas Anjum Jaffri visited Australia on the invitation of Islamic Forum for Australian Muslims (IFAM) in May 2019.

Mr Jaffri is the CEO of Dar-e-Arqam school group which has more than 650 campuses located in many different cities of Pakistan.

Dar-e-Arqam schools are a great help to middle-class society of Pakistan who strives for quality education at affordable prices.

Mr Jaffri is also the director of Al-Ghazali education trust which is quite well known in Pakistan for its broad range of educational services.

Al Ghazali trust arranges and supervises many different educational facilities in rural and remote areas of Pakistan where normal education facilities are deficient or not available.

Mr Jaffri, while addressing a gathering in Sydney, told that the purpose of these facilities was to help poor and needy students who couldn not pursue their education for a number of reasons.

He explained that there were no charges and fees for the students except those who could afford to pay something. The payment schedule was not compulsory and it was up to the choice and affordability of the families of individuals students.

Mr Jaffri said that there were more than 4000 students being accommodated in different villages who were also given free books and stationery.

A large number of students were those who had some disability or mental retardedness. They couldn’t find any specified facilities in nearby areas and Al-Ghazali trust was committed in reaching out to them for support.

He also mentioned that they were working closely with many government and non-government organisations for getting sponsorships and for sharing resources like teaching staff, classrooms and transportation.

Mr Jaffri is also the Chairman of ‘AFAQ’, an institution involved in designing and printing of different textbooks.

He told the gathering that they were getting almost 10 million books printed every year under ‘AFAQ’ umbrella. These books were being distributed in different educational institutions in Pakistan and abroad.

These books were also being provided in different Islamic schools around the globe including Japan, USA, Canada, Europe and Australia which fulfills the requirements of modern education in accordance with the Islamic way of life.

He thanked IFAM for inviting him to Australia and giving him the opportunity to speak.

He advised all the brothers to uphold Quran for guidance and live with unity to make a good Islamic community.

Mr Jaffri concluded by saying, “Humans are social creatures and have always lived in groups. They tend to associate with other people of similar beliefs and values. The best group of people are the ones who enjoy the true fellowship of each other just for the sake of Allah and without any material interest.” 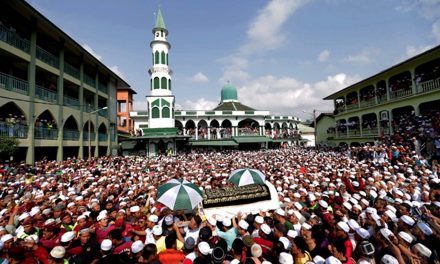