There are so many verses in Quran which highlights the importance of charity. In Islamic system it is compulsory to extend help to needy stuck in hardship. In one of the hadith Prophet Muhammad (s) said that “By Allah he is not a momin (faithful Muslim) who sleeps with full stomach of food but his neighbours are starving”.

It is quite known to us that people face countless misery in poor and under developed countries since governments are not self sufficient to lessen the grief.

Similarly medical facilities are very limited. Also we often hear the news from different parts of the world where masses are engulfed in war situations or ethnic unrest.

Charity Australia International (CAI) is an organisation engaged in helping and supporting activities for almost 15 years now. In annual fund raising dinner held on Saturday April 13, 2019, Brother Wajahat Rana, Chairman of CAI, gave a brief outlook of its activities. He told the audience that about $72,000 AUD were spent on orphan care last year. He said that every year they were taking more kids under their care.

Funds were being used on well being and education of those kids. Charity Australia also manages AL-Siyam ( Feed the fastings) in Ramadan in some remote and poor areas, pays zakat ul Maal to many needy and spends on educational activities called Roshni project.

In another key project called “ Zum-Zum” several water pumps, water wells, water storage facilities were established in Thar and Cholistan deserts. Similarly there was a Qurban project in which people living in Australia were encouraged to do their sacrifices in Pakistan.

Every year CAI arranges the animal slaughter and makes sure that meat is distributed in remote villages of deprived areas. Brother Wajahat also told the audience that there were 7 ambulances being operated by CAI in Pakistan.

Similarly there were two laboratories for medical testing with 50% cheaper rates.CAI was also building a medical complex in Mithi, Tharparker which would include a medical facility for outdoor patients (already operational) with staff hostel, mosque and an orphan care centre called “Agosh” to be built soon.CAI was also building a four storey state of the art hospital in the outskirts of Multan.

There would be indoor and outdoor patients departments and the first phase of the hospital would start next year. This was a massive project which would be a great help to the nearby villagers as there was no other medical facility in the area. This would be 100 beds facility spread over the area of more than 3 acres with future extension plans. Another project is breakfast program for the kids in Emeraton Public school in Sydney’s west.

This area is known for many housing commission premises and people living there are poor. Another very important project of CAI is Women support centre. It is serving the women who are stuck in unpleasant circumstances and don’t find any immediate support. Women support centre also engage them with Islamic and social activities. Staffs do counselling so their mental and emotional well being is maintained.

Brother Wajahat then discussed Emergency Relief efforts. He mentioned that CAI delegation was swift to fly or move to any catastrophic areas if any disaster happened. A high level delegation of CAI had visited Christchurch and stayed there for more than a week.

They participated in burial services, had meetings with victim families to understand and help in key issues and formed a team for continuous support. At another instance, CAI delegation visited Bangladesh to help Rohingya Muslims who had fled from Myanmar during the massacre.

CAI arranged tents, blankets, medicines, food and water for them. With the help of Almighty Allah more than $350,000 were pledged in this fund raising dinner. Brother Wajahat Rana, Chairman of CAI, thanked all the participants for their generous support. 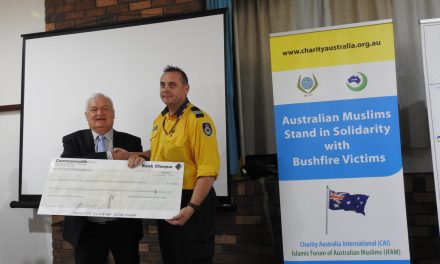 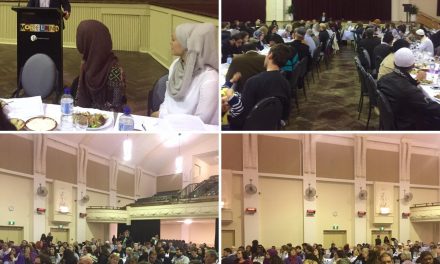