Bluestar Intercultural Centre conducted their annual iftar event on Tuesday 14 May at the Australian Centre for Christianity and Culture (ACCC) in Barton, ACT.

The evening commenced with the call to prayer followed by a talk by Shan Gunawardena, a prominent member of the Muslim community.

Professor Stephen Pickard, Executive Director of the ACCC, welcomed the guests and, after dinner, introduced Dame Annette King, the New Zealand High Commissioner to Australia, who gave a passionate speech about hope out of despair. Najiya Hamack then introduced the audience to the keynote speaker, Hana Assafiri OAM, founder and owner of the famous Moroccan Soup Bar in Melbourne and a vocal speaker on issues relating to feminism and Islam.

Muhammed Aksu, Director of Bluestar Intercultural Centre, delivered his Vote of Thanks before the evening wrapped up with dessert, tea and coffee.

Photos of the event can be found at: 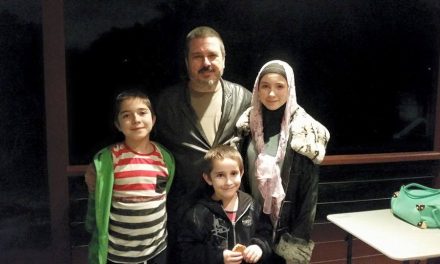