In today’s modern Australia, multiculturalism is prevalent in all aspects of our society. We’re either grabbing a quick Vietnamese to-go Banh Mi baguette for lunch during busy days of back-to-back meetings or shopping for matching colourful accessories for our outfits at the Indian-inspired chain of female fashion stores Tree of Life, or we’re buying Turkish bread to make delicious toasted sandwiches.

It is now a definitive part of us as a society, and as such, it is important that we embrace this unique asset of our nation and allow multiculturalism to thrive in every way possible. Thus, we as a nation need to ensure that Australians from multicultural backgrounds are provided with proper representation at large.

The establishment of non-for-profit organisations like FECCA, The Federation of Ethnic Communities’ Councils of Australia, is integral in our nation to ensure that the needs and aspirations of Australians from diverse cultural and linguistic backgrounds are given proper recognition in public policy.

FECCA is the peak national body representing Australians from culturally and linguistically diverse backgrounds. Furthermore, FECCA’s role is to advocate and promote issues on behalf of its constituency to government, business and the broader community. It works to promote fairness and responsiveness to our constituency in the delivery and design of government policies and programs. FECCA can help our nation continue to be the successful and harmonious multicultural society that we are.

A significant organisation like FECCA must be led by a leader of a high calibre, and after an insightful conversation with the man himself, I was honoured to be able to have fruitful discussions with the Chief Executive Officer of FECCA, Mr Mohammad Al-Khafaji.

His is an inspiring story from when he and his family first moved to Australia. As a fellow overseas-born myself, Mr Al-Khafaji’s story of welcoming and appreciating a new country with bountiful opportunities is one which resonates with me.

Among Mr Al-Khafaji’s duties in the organisation are to ensure its operations and finances are well-managed. He ensures that FECCA’s policy work is strong, policy papers and parliamentary submissions are responded to, and essentially, to advocate on behalf of communities.

“If there is an issue to be addressed, we (FECCA) make sure that we raise it,” Mr Al-Khafaji said.

Importantly, Mr Al-Khafaji’s role consists of stakeholder engagement where those in leadership speaks to their members to address the members’ concerns and issues so that the conversations can be escalated at a higher level.

At its core, FECCA works towards ensuring political leaders understand that our cultural diversity is an asset to us, which we need to embrace and nurture. It wants to ensure the policies that are in place moves this concept into the future.

FECCA also wants to ensure that political candidates, governments, and oppositions acknowledge that the multiculturalism of all communities, in all its diversities, requires government policy to be adapted and to ensure it addresses the unique needs of different communities. As Mr Al-Khafaji explains:

“[FECCA’s work] is to make sure that we move away from politicising race and religion when it comes to winning votes because that’s when the dangers of us slipping as a successful multicultural nation could happen,” he said.

Mr Al-Khafaji’s journey to his role as CEO today is an inspiring and interesting story. He first came to Australia at 13 in 2003, and the sense of social justice was present in Mr Al-Khafaji since the very beginning.

He stresses that he owes a lot of his successes to his mentors from a young age, from the high school teachers that saw potential in him to the various mentors that have helped him through the journey. Teachers in high school would encourage young Mr Al-Khafaji to do extra-curricular activities including being involved in University councils and debating opportunities.

“I think it’s really important to make sure that our communities have strong mentors to encourage young people to do extra-curricular activities – to get out there and involved, and not just sit back and expect things to happen for them,” he said.

Mr Al-Khafaji highlights that to achieve success, one must have “passion, hard work, and a lot of helping hands.”

A notable period of the journey was Mr Al-Khafaji’s move from his role as a Business Analyst in the private sector to enter the multicultural sector which he says was a ‘brave jump’. As Mr Al-Khafaji describes, however, the risks have paid off as the organisation grew tremendously in two-and-a-half years nationally, also with the generosity of the community and highlighting the message of ‘Welcome to Australia’. 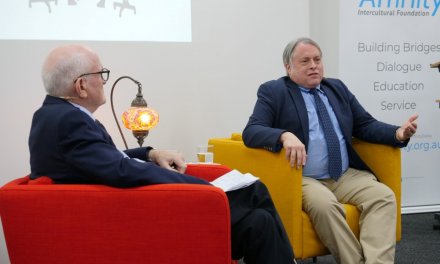