The campaign launch of Pallavi Sinha, a high achiever of Indian origin standing for the NSW Upper House during the state elections, due on Sat 23 March, was held on Friday 1 March at Grand Marion, Harris Park attended by ministers, politicians, supporters as well as family and friends.

An active community worker, Pallavi, lawyer and academic completed economics (social sciences) and law degrees with honours from the University of Sydney and was selected on the prestigious AFR & Westpac 100 Women of Influence list.

She is the only Indian origin person to successfully get a position on the Liberal ticket for the NSW Upper House/NSW Legislative Council for the upcoming NSW State election on 23 March 2019.

To ensure that Pallavi gets your vote, please vote BELOW THE LINE ONLY. You must number 15 people below the line with number 1 in the box next to Pallavi’s name, & then number boxes next to at least 14 other candidates of your choice to make the vote valid.

If at least 15 boxes are not numbered below the line then the vote will become invalid.

Pallavi Sinha’s qualifications are well-suited to Parliament, particularly as it is one of the branches of Government which makes the laws of NSW. Her work experience is particularly relevant to the NSW Upper House / NSW Legislative Council, which is often called the House of Review because of its role in scrutinising Government legislation and holding the Government to account. The campaign launch was attended by a number of politicians, community leaders and volunteers including: 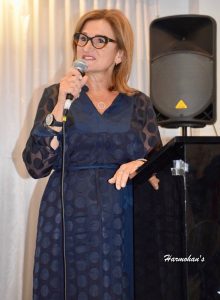 “Australia is far from having gender diversity, especially in public life. When we have extraordinary individuals who are fearless, like Pallavi, who have credentials, who is committed to community, whi is qualified, who has empathy, who is a good listener, who is willing to put her own time, we know it’s not a 9 to 5 job…Pallavi is the sort of person that I would love to see representing us in Parliament & I think that she would do a fantastic job” “She is an intellectual powerhouse, but in addition to that, she has one of the biggest hearts of anyone that I know. She cares about people, she cares about others & that’s one of the things that sets her apart…she’s a doer, she rolls her sleeves up & she has a crack. So you’ll see her every night of the week at a community event or championing a great cause, whether it be DV or racism, Pallavi is on the front line standing up for what’s right & supporting communities across this great state so I think it’s appropriate that someone who lives those values goes into Parliament…she’s someone who hasn’t been given anything on a platter. She’s got what she’s got because she worked hard & never took no for an answer…we need people like Pallavi going into Parlaiment, someone who’s prepared to put the community first, someone who’s willing to stand up for Liberal values that have not only made the Liberal party great but they’ve made our country great ” She presented submissions before the Inquiry into s20D of the NSW Anti-Discrimination Act 1977. As a result of combined efforts by many organisations and individuals, there has been law reform to address some of the problems with s20D. Pallavi would particularly be a great asset to NSW Parliament as Minister for the Prevention of Domestic Violence and Sexual Assault since Pru Goward MP is retiring after the NSW election on 23 March. Pallavi would fill this void, especially as she has vast experience in the area of DV

“Her qualifications, skills and experience make her a very worthy candidate for the NSW Parliament, especially the Upper House. She has also presented submissions before a Government. Her experience would serve her well in the role of the Upper House in scrutinising executive government, introducing or reviewing Bills and Chairing or participating on Committees… she has the professional skillset, work and life experience, to be capable of holding a Cabinet/Ministerial post. Ms Sinha is proactive and with her enthusiasm, commitment, dedication and energy, she has alot to contribute as a Member of the NSW Parliament.”

Pallavi has worked very hard for the Liberal Party. Over the years she has convened Forums in areas such as small business and innovation, she has spoken at or MC at Liberal Forums

Pallavi is attending & speaking at the Muslim Women’s Welfare of Australia ‘Women’s Life Expo’ this weekend which is for women only and is proudly supported by Multicultural NSW.

We encourage the community to support our Pallavi who has significant work & grassroots experience in advocating on behalf of community interests, and is well-placed to help the NSW Parliament to address serious issues such as DV.