The killing of 42 Indian security forces on Thursday 14 February in Kashmir valley by a young Kashmiri suicide bomber has triggered gun battles between Kashmiri militants and the Indian military resulting in the killing of several militants, police and military officers as well as civilians.

Kashmiris, who have been calling for self-determination as promised by UNO and agreed upon by both India and Pakistan, have been caught in vicious cycle of violence perpetrated by militant separatists and oppression by the Indian military with killings, disappearances and human rights abuses on an ongoing basis for decades.

Following the suicide bombing, mass hysteria of outrage has gripped the Indian population following hate speeches by the Hindutva brigade comprising of Hindu right-wing leaders including the ruling BJP led by PM Modi publicised by the mainstream media as well as social media against Kashmiris and Pakistan.

India has been drumming the beasts of war since the terrorist attack claimed by a Pakistan based JeM armed group espousing bigoted anti-Hindu and anti-Indian agenda.

Pakistan has denied that it was involved in any way in the attack which it claimed was “conceived, planned and executed indigenously”. Pakistan reiterated its offer to help investigate the attack and to take action against anyone found to be using the Pakistani soil for attacks on India.

Analysts say that the saber rattling of Modi government against Pakistan is politically motivated preparing for the upcoming national elections that BJP is afraid of losing.

Creating national security crises using Pakistan as the bogey man and religious polarisation among the Indian voters is thought to benefit the Hindu nationist cause at the elections.

Kashmiri students studying in various Indian universities have been attacked, Kashmiri businesses ransacked and many Kashmiris have complained of intimidation and harassment in various parts of India.

It is suspected that the arrests are in preparation for the court hearing designed by the BJP government for the abrogation of Article 35(A) of the Indian constitution that gives the special right to property and jobs to Kashmiri permanent residents.

The arrests have drawn widespread criticism from Kashmiri political leaders.

“I fail to understand such an arbitrary move which will only precipitate matters,” Mehbooba Mufti, former chief minister of Jammu and Kashmir state said.

“Such illegal and coercive measures against Kashmiris are futile and will not change realities on the ground,” said Hurriyat Chairman, Mirwaiz Umar Farooq. 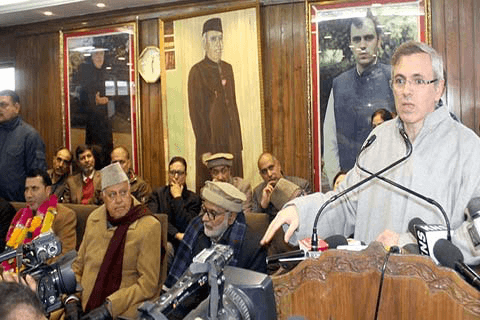 National Conference vice-president and a former chief minister, Omar Abdullah on Monday 25 February warned New Delhi that any fiddling with J&K’s special status will have “serious and far-reaching consequences” in the state.

He reiterated that New Delhi and the governor-led administration in Jammu and Kashmir should leave the defence of the state’s special position to the state’s elected government.