The Islamic Museum of Australia in partnership with ISRA launched the “Mecca to Marree, A Journey in Virtual Reality Experience” on Wednesday 5 December in Melbourne.

The VR experience took the audience through a historical journey from the Mecca of 650 CE to Australia in the year 1885, following the development and spread of Islam through its humble beginnings to the ages of the Caliphs and to its arrival on the shores of Australia in Maree.

A number of Islamic school principals, community leaders and volunteers attended and played with the new VR equipment. The Virtual Reality Experience goggles gave individuals a guided tour and historical narrative while giving them a depiction on what these sites would have looked like.

The most common comment made by those who took the tour was “it feels so real.”

The VR  tour begins in Mecca and concludes in Maree, one of Australia’s very first mosques. It gives the audience a better sense of connection from where it all started to its first presence in Australian society.

The VR Launch is currently available at the Islamic Museum of Australia in Melbourne There are plans to take the ‘tour’ to other states of Australia, including rural areas, as well as overseas. Zeinab Mourad is an Enrolment Officer and Academic Mentor at Charles Sturt University. 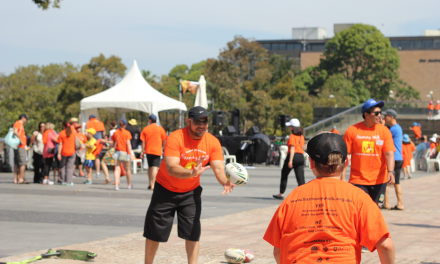 Harmony Walk 2014: Moving together in peace