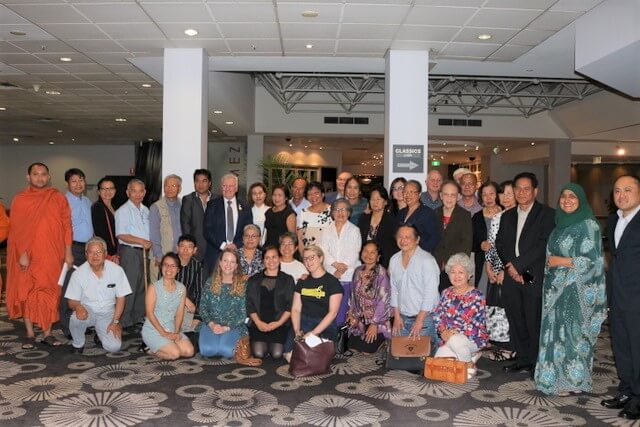 Mr Chris Hayes, Federal member for Fowler and Chief Opposition Whip was delighted to see such an overwhelming response from the community in raising concerns for human right abuses across the globe in general and in our region in particular. During his welcome address, Mr Hayes said that as Australians enjoying benefits of human rights and freedoms, we ought to promote these rights for all on the globe and raise concerns in areas where abuse is taking place.

He introduced the guest speakers at the forum and welcomed community leaders and activists who made representations with him in raising concerns on human rights abuses in their home countries, in particular, the Rohingyas and the Uyghur people present at the forum. The first speaker at the forum was Mr Wayne Gum, East Asia Regional Manager of OXFAM said that human rights included economic rights and labor rights and we should be concerned if these rights are abused. He drew attention to the human rights abuses in the Middle East in the wake of wars and internal conflicts especially highlighting the plight of Yemeni people who are now facing famine with 60% cases of malnutrition.

He said that in addition to providing aid in helping the victims of war, we need to call upon political leaders to work towards ending conflicts in the region and stop the supplying of arms to those inflicting misery on the civilian population in Yemen.

He also talked on representation with multinational businesses who were exploiting workers in third world countries benefitting from cheap labour while not upholding standards in workers rights and safe working conditions and urging them to take responsibility in disasters such as that in Bangladesh with the collapse of a factory in 2015 where more than 2000 workers were killed. She said that all freedoms have been taken away from Rohingyas in Rakhine state that included freedom to move, freedom to education, freedom to get involved in the business activity and therefore it was not safe for the Rohingya refugees to go back to their homes without any safeguards to their security and guarantees for rights and freedoms. Ms Dinh Tran, Registrar at the Family Court of Australia said that although the human rights abuses in Vietnam were not as intense as in Myanmar and Yemen, nonetheless there were abuses as a result of one party authoritarian regime neglecting upholding of laws, accountability by police and others in authority and neglecting responsibility for the protection of the environment.

Ms Holly Miller, Head of Global Engagement at ActionAid, that specialises in addressing human rights for women in particular. She said that women suffered most from human rights violations since they were marginalised because of lack of empowerment in refugee communities. During the Q&A session, a number of the audience made comments and asked questions from the floor.

Mr Zia Ahmad, Editor-in-Chief of AMUST said that while living in democracies such as ours, we need to make representations to our politicians to ensure top priority is given in upholding human rights in authoritarian countries we deal with rather than narrowly safeguarding our own national interests in trade and arms sales.

He gave an example of President Trump while knowing and acknowledging the role of top Saudi leadership in the brutal murder journalist Adna Khashoggi, was not will to take any action against the country because it would jeopardise more than 100 billion arms sale deal between the US and Saudi Arabia.